Hometown
on thin ice or in hot water

You're going to find out in short order what works best for you - and it's gonna change from one hitch to the next. Over time you'll be able to draw some general conclusions. Once outside of Las Vegas some highway cops picked me up and drove me all the way back to the Air Force base, warning me there was a correctional facility near where I was hitching and property owners in the area typically shoot before asking questions. Keep us posted on your progress!

Juan Derlust said:
You're going to find out in short order what works best for you - and it's gonna change from one hitch to the next. Over time you'll be able to draw some general conclusions. Once outside of Las Vegas some highway cops picked me up and drove me all the way back to the Air Force base, warning me there was a correctional facility near where I was hitching and property owners in the area typically shoot before asking questions. Keep us posted on your progress!
Click to expand...

Good piont. Ive always had a hard time hitching out of Las cruces and someone told me its cuz theres a prison nearby lmao.

I just wanna add one more thing given the OPs age and experience. A rule i always go by is:
DONT HITCH AT NIGHT!!

I usually stop trying around 5pm, cuz it can be kinda creepy riding with someone youve never met when its dark and there are sketchy people out there. Not usually dangerous, but sketchy for sure.

Sometimes people make little stops or errands, and i wouldnt like that shit at night time.

I've found it kinda hard to turn down rides from people, cuz i get impatient and tend to jump in cars without giving a shit. (Sometimes its fml idgaf lmao)

I usually turn down rides based on distance and destination and dont really judge people too hard before getting in. Just keep that in mind, cuz you dont wanna be with a sketchy "making a little stop" at 10pm in a place youve never been...

That being said hitching isnt all that hard or scary, and ive never personally felt like i was in any real danger. If someone is creepy (like sexually) just make a reason to get off at the next exit.

Yeah $50 will slip through your fingers. I wanna say nothing is impossible but if you can, it’d be worth it to save up a few hundred as a cushion. Bare bare minimum $200. I recommend going with someone your first time but in the spirit of harm reduction here are some things I was told my first outing and from my own experience:

When a driver pulls over, ask where the driver is going before they ask you to help filter out creeps trying to follow you.

When in the car make conversation, be aware of your surroundings, where the drivers hands are, what’s in the car, etc.

Something like pepper spray would be useful to keep on you.

Honestly MOST of my experiences have been of positive, helpful people but there are those who may have other intentions and one bad experience can be more impactful than a whole bunch of good ones.

Unless you want to bikepack, ditch the bike. Sell it. At most carry a skateboard with you or something.

Keep important phone numbers of people who can help you on a written piece of paper and keep it safe - the dad in me tells you to laminate it if possible.

Carry a paper map and plan out a rough route of where you want to go.
Oh and to add, pack expecting to lose or have all your shit stolen aka don’t bring super valuable or irreplaceable shit with you. 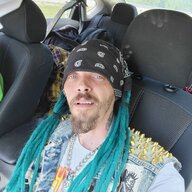 I try to keep it as light as possible. I keep a pair of jeans and a few shirts along with some necessities for the road. A small traveling blanket flashlight reflector vest, utility knife, and I carry a banjolele for my personal entertainment also comes in handy for making a few extra bucks, Rope to make a temporary shelter if need be. Those trips can have long walks so I keep it light.hope it helps you I started traveling at 16 also bbroker then 50 dollars. Good luck and hope you stay safe. My pack is ready for my trip out of new york Thursday morning. 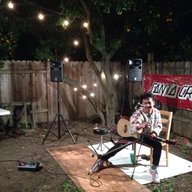 How was your trip, did you make it?
D

KDogWalkin said:
How was your trip, did you make it?
Click to expand...

Lotus Shaped Potato
Nearly done with the electrical system of the van. 170Ah Lithium ion, 2/4K inverter, 400 watt of solar, 40A MPPT controller. Should be up and running (or explode) this weekend.

After that I have to finish the primary work table, which will be the last big piece of the build.
Yesterday at 5:40 AM •••

Matt Derrick
Hey folks, we've opened up a new thread to discuss organizing this year's jamboree in the san juan islands! You should throw in your two cents! https://squattheplanet.com/fest
Friday at 2:05 PM •••

Strangeandsolo
returning refreshed, refurbished and re-treaded ... om back what did i miss?
Thursday at 7:13 PM •••

kriminalmisfit
NOLA anybody? i got wheels. thinking about getting something to drink and marking some trains
Wednesday at 9:06 AM •••

Oddman Brodiesel710 Oddman wrote on Brodiesel710's profile.
Nice picture, on the Wikipedia "hobo" page... I was working on that page a little, a few weeks ago. It's a total mess and I just scratched the surface, but I keep watching and hoping someone else will improve it. That photo improves it for sure. Wish I knew enough about hobo history to write something decent there.
Tuesday at 11:50 PM •••

Hazardoussix6six
Got a new pad in CinCinNasty , anyone passing nearby hit me up. Got a couch and brews
.and smoke if that's your thing.
Tuesday at 7:23 PM •••

Breezyloven
el Pasooooo.... here I AM. Sticken out like a white girl in mexico haha. Hitchen to white sands in a couple days oo baybeh ~ who's out here?
Still learning how this werkz lol
Tuesday at 12:44 PM •••