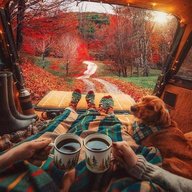 What's going on Ramblers, Gamblers and Nomadic Squatters alike. Found this whilst looking for an alternative to locking myself into my topper while boondocking. Been camping, traveling, fixing, adding and as of this year hitting up the Rambler 500 and Gambler 500 shoulda been the Gambler 250 1/4 with the Red Feather Lakes / Cameron Peak fire.

Left AK in 2011 and hit the states lived just about everywhere, somehow managed to end up in fucking Wyoming. Currently enjoying myself, traveling and camping about everyday.

Hooking up my old F150 King Ranch with mods. Added a drawer system, added 2 batteries, waiting on the Bluetti AC200, upgraded to the monstrous yakima mega warrior rack. Added another monstrous Dometic CFX3 100, of course decked it out with Rigid Lighting everywhere. I have a nasty LED lighting habit. Oh just ordered a waterport as well just in time for winter.... Practicing Wim Hof. As if I didn't get enough working in Prudhoe Bay - MCC.

Plenty more mods added, get into that later.

Currently a part-time couchsurfing squatter when I leave mi casa. Lost my oilfield job, recently just lost my CDL, (fuck that police) so 20 years no mas oilfield career pissed away.

If anyone is near FoCo I'm in Cheyenne, Wyoming atm. Willing to go out and camp anytime. Also if you need a spot to crash, and somewhere safe to park I have a place.

Also hit me up on couchsurfing.


That's as much as I'll spew.
Take it light.