Inside the £15million Belgravia mansion owned by a Russian billionaire that squatters have taken over – and they seem pretty settled already!

SQUATTERS have taken over a Russian billionaire’s £15million mansion in one of Britain’s most exclusive streets.

The group are believed to have broken into the Grade II listed home in London’s Eaton Square earlier this week. 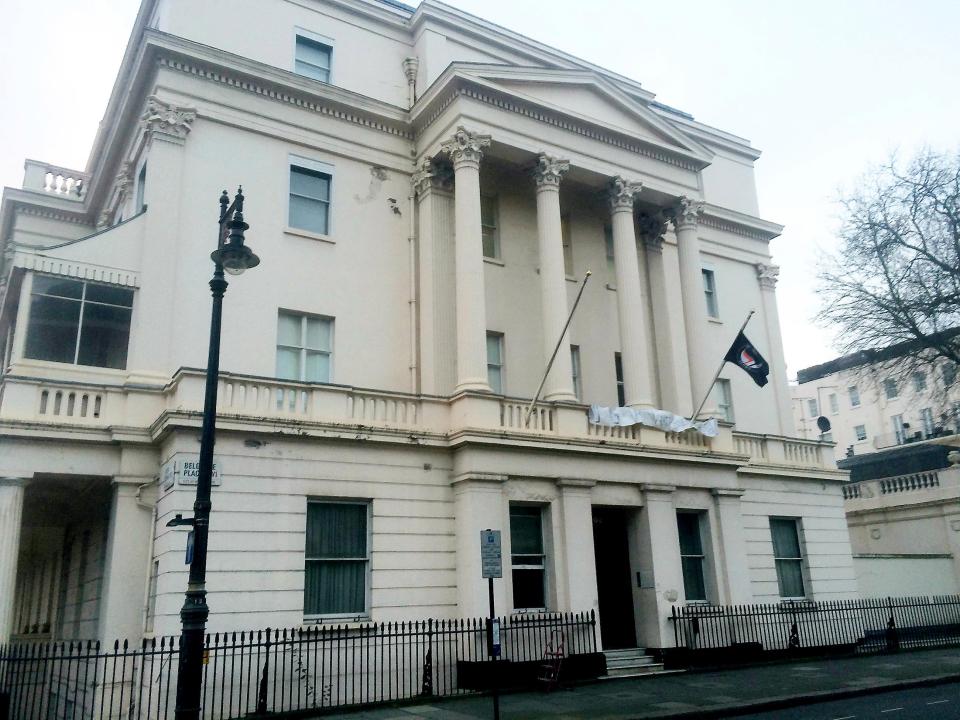 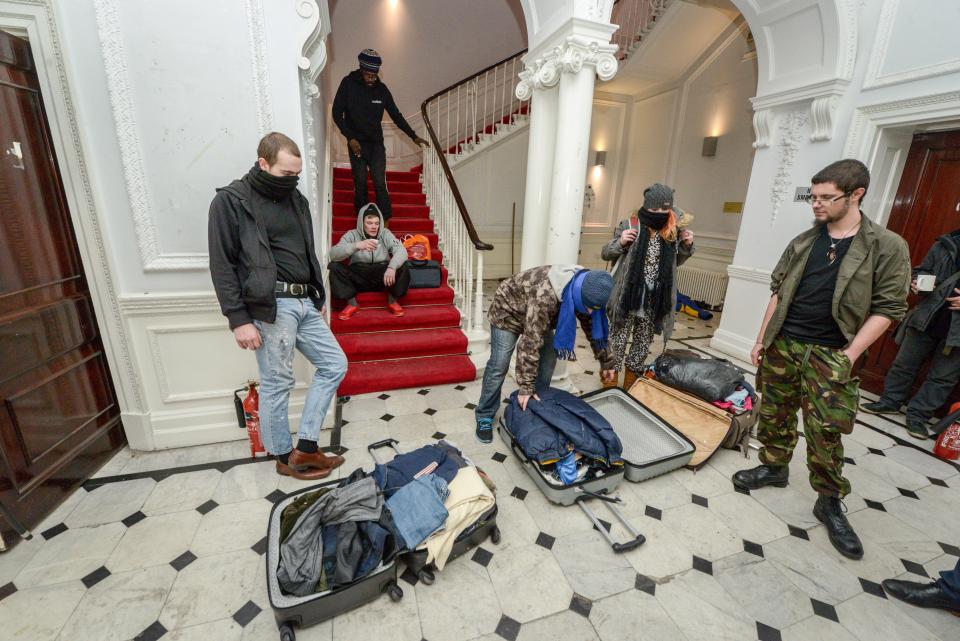 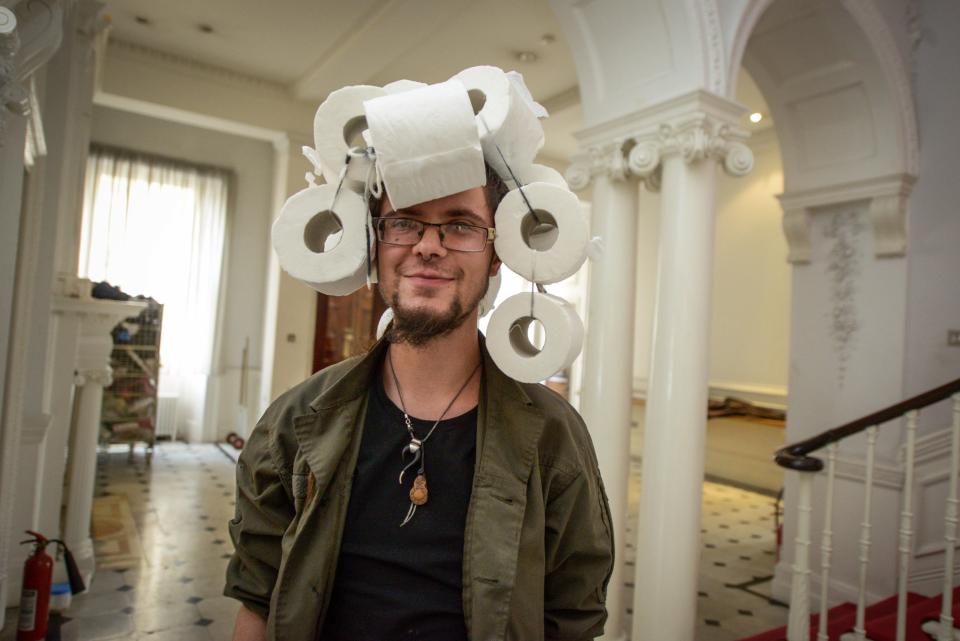 Squatter Jed enjoys a light-hearted moment while he settles into his new 15,000 square foot residence 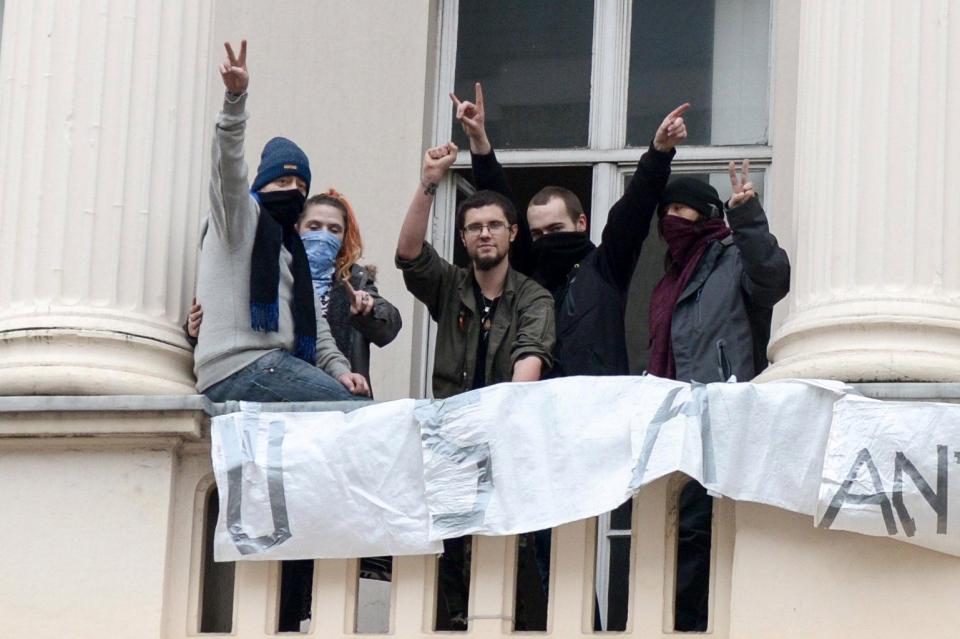 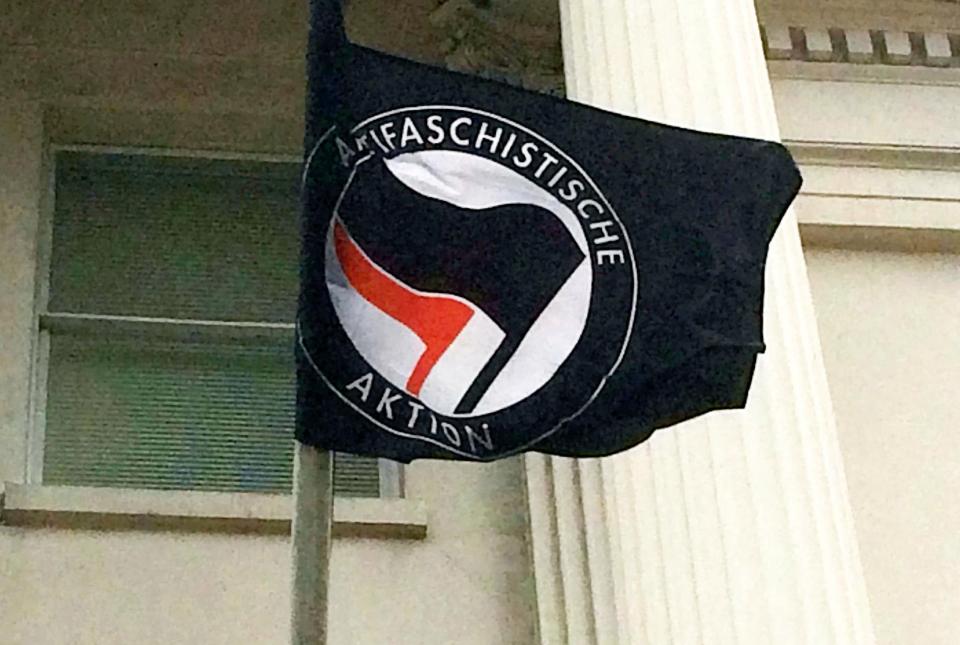 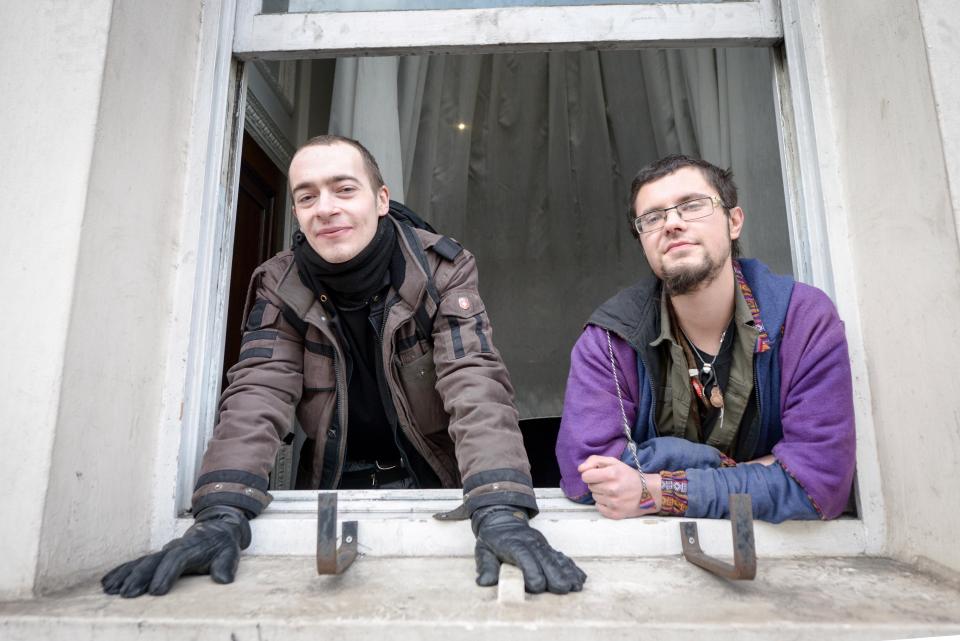 Squatters Tom Fox alongside colleague Jed address the media from inside multi-million pound mansion they have occupied
Incredible images from inside the mansion – thought to have been empty ever since oligarch Andrey Goncharenko bought it in 2014 – show the squatters have made themselves right at home.

Squatter Tom Fox, 23, said they plan to open up the huge Belgravia house, which used to be a Spanish school, as a homeless shelter, adding that Goncharenko had left the house “to rot” since he bought it.

“It’s just making a point about fighting capitalism with capitalism.

“I don’t think I’d want to sit down and have a discussion with him – I don’t know him, but I don’t think we’d agree on things.

I saw this the other day and couldn't work out how they hadn't been kicked out by the police, because you can't legally squat residential property. It does say that it had been used as a school so perhaps that counts as commercial.

Either way, good for them

Here's a vice article about the eviction.

The anarchist squatters who took over a $19 million mansion in London's bourgeois Belgravia neighborhood and opened it up to homeless people were forcibly evicted this morning. After a court order was issued on Tuesday, bailiffs battered down barricades and pushed homeless resisters to the floor. I headed down to watch the resistance from the inside.

The occupiers—Autonomous Nation of Anarchist Libertarians (ANAL)—had expected their defeat. And they weren't wrong to presume: Nick, a cheery squatter, said the court hearing over their eviction lasted all of three minutes.

After hearing the news of the court order, the squatters held true to their egalitarian credentials and organized a council yesterday evening in the mansion, taking a vote on whether or not the 30 or so squatters in the building wanted to resist the eviction. Almost every hand shot up, and talk turned to tactics. 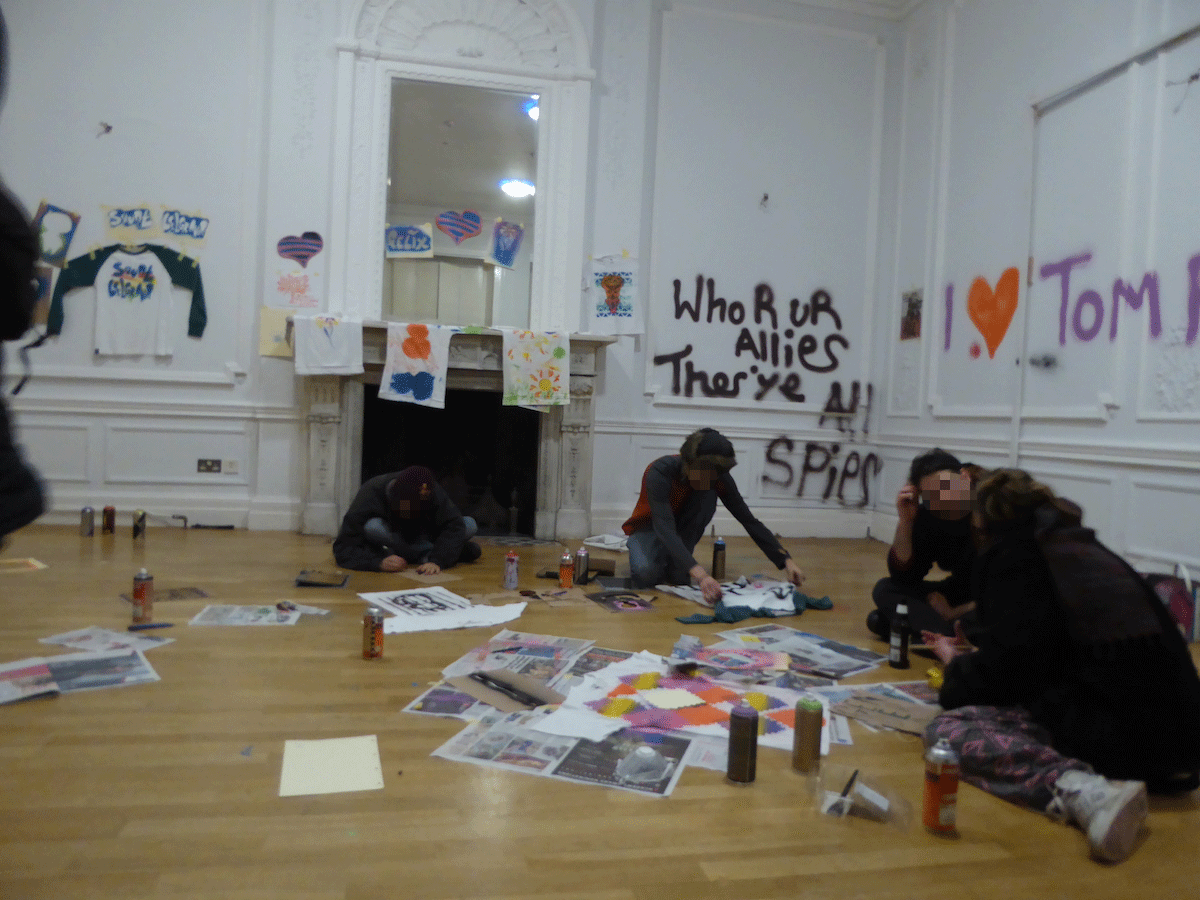 First-time resisters were advised to play dead once the invasion took place, while one veteran advised "spreading Marmite and piss all over the floor when they get inside—it's a chemical weapon. It really stinks... they'd have to get pressure cleaners in to clean up." Calling for focus, another experienced squatter reminded the group: "Mayhem generates support. For half an hour after the eviction starts, there'll be so much media attention. We have to record the bailiffs vandalizing a Grade Two listed building."

People then moved out to scavenge for pallets and call in backup to defend the luxury property.

In fact, the hi-vis interloper was a security guard stationed in the neighboring building. Initially coy, he got drawn into a debate with a couple of squatters. "Ten percent of squatters are OK, sure," he said. "But the other 90 percent are disgusting. The places I've seen… they're full of junkies."

"We all have ways of coping," shot back a squatter called Kate. "And those are people at the absolute bottom of society, coping the only way they can."

Back downstairs, people started securing all the entrances and exits, screwing shut doors and hammering planks of wood across windows. Some needed extra reinforcement, having been smashed by a gang of Nazi-saluting fascists on Saturday as an activist ran a poetry workshop and children colored in banners.

Other squatters started preparing a communal meal, under the guidance of a squatting veteran called Tammy. "The posher the house, the more media attention we get," she explained as she whipped up a vat of Quorn lasagne. "We're neighbors with the Queen here. And this is just a group of homeless people who'd otherwise be stuck outside in this foul weather."

"Me, I'm like a cockroach," she added later. "Wherever I am, I always survive."

As I was cutting up a carrot, a squatter called Josh wandered over.

"Yeah, I know what you mean—it's so difficult cutting up veg on a plate with a lip."

"No, I mean the knife. I was stabbed in the back with one just like that. It nearly killed me—my heart stopped twice." Josh went on to explain that he was five days clean from an addiction struggle, and heading back up north to visit his family and child for the first time in 15 months.

The barricading continued until the small hours. People drank, chatted, and played music, or slept sprawled across the stairs and huddled in corners. Tension and exhaustion grew, with multiple false alarms as different officials scouted out the building and squatters raced to pack up their possessions. 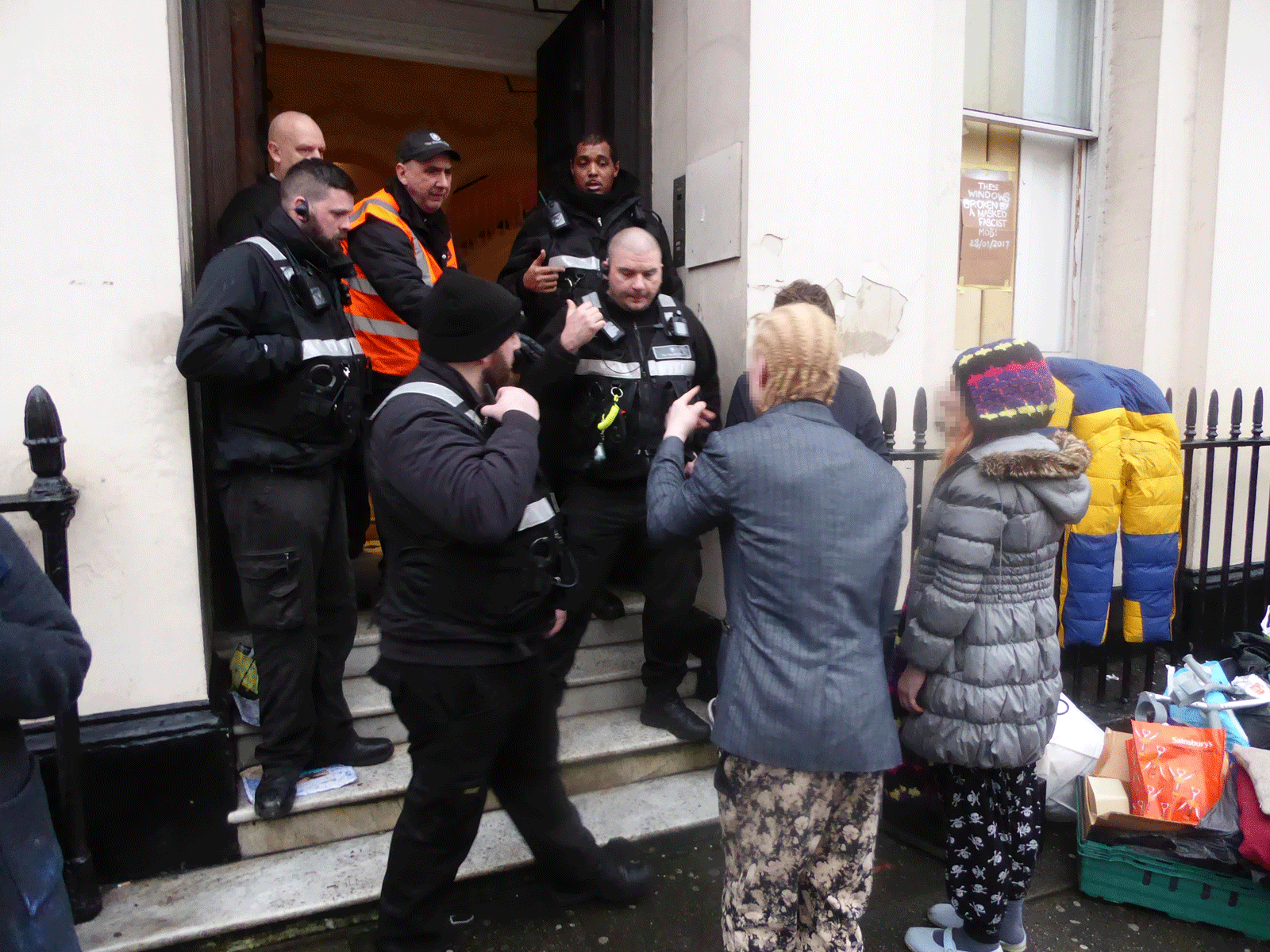 Bailiffs outside the squat

At 8 AM this morning, the bailiffs arrived. Backed by a slew of police officers and a pointless fire engine, around 15 representatives of private evictions company the sheriff's office swarmed around the mansion and battered on the reinforced doors with rams. The anarchists laughed as their handiwork withstood the strong arm of the law, driving the bailiffs to weaker doors downstairs.

They were met with blasts from fire extinguishers and chants of "we shall not be moved," but muscle prevailed and the heavies surged into the building. While arguing fiercely with a bailiff, Josh was grabbed from behind and slammed to the floor by one of his shaven-headed colleagues. One squatter with cerebral palsy, who could only walk with the aid of crutches, was unceremoniously carted out on piggy-back by a friend. Another sat on the floor to meditate, prompting a bailiff to snap: "You'll be doing some pretty non-peaceful meditating if you don't move now."

Tammy confronted the bailiff who manhandled Josh. "It's fucking disgusting, kicking homeless people onto the street," she yelled. "You're one paycheck away from homelessness yourself."

*Names have been changed to protect the identities of squatters.
A

I wonder when will things get violent.

Sent from my 4009X using the Squat the Planet mobile app!
You must log in or register to reply here.

The anarchist squatters of Manchester