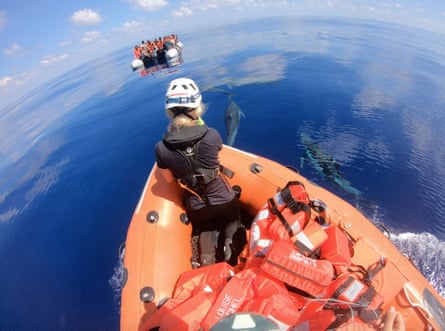 The British street artist Banksy has financed a boat to rescue refugees attempting to reach Europe from north Africa, the Guardian can reveal.

The vessel, named Louise Michel after a French feminist anarchist, set off in secrecy on 18 August from the Spanish seaport of Burriana, near Valencia, and is now in the central Mediterranean where on Thursday it rescued 89 people in distress, including 14 women and four children.

It is now looking for a safe seaport to disembark the passengers or to transfer them to a European coastguard vessel. 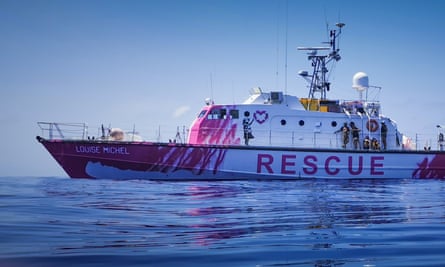 The crew, made up of European activists with long experience in search and rescue operations, had already assisted in two other rescue operations involving a total of 105 people, who are now onboard the NGO vessel Sea-Watch 4.

Painted in bright pink and featuring Banksy artwork depicting a girl in a life vest holding a heart-shaped safety buoy, the Louise Michelsails under a German flag. The 31-metre motor yacht, formerly owned by French customs authorities, is smaller but considerably faster than other NGO rescue vessels.

Banksy’s involvement in the rescue mission goes back to September 2019 when he sent an email to Pia Klemp, the former captain of several NGO boats that have rescued thousands of people over recent years. 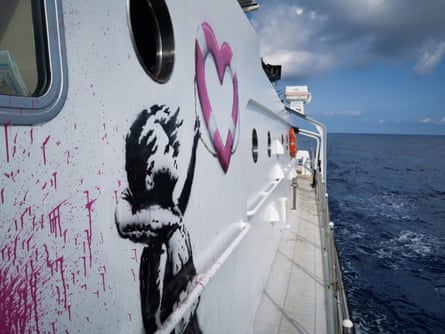 The vessel set off in secrecy from the Spanish port of Burriana, near Valencia. Photograph: Ruben Neugebauer

“Hello Pia, I’ve read about your story in the papers. You sound like a badass,” he wrote. “I am an artist from the UK and I’ve made some work about the migrant crisis, obviously I can’t keep the money. Could you use it to buy a new boat or something? Please let me know. Well done. Banksy.”

Klemp, who initially thought it was a joke, believes she was chosen by Banksy due to her political stance. “I don’t see sea rescue as a humanitarian action, but as part of an anti-fascist fight,” she told the Guardian.

She has made clear that Banksy’s involvement in the operations is limited to providing financial support. “Banksy won’t pretend that he knows better than us how to run a ship, and we won’t pretend to be artists.”

With a top speed of 27 knots, the Louise Michelwould be able to “hopefully outrun the so-called Libyan coastguard before they get to boats with refugees and migrants and pull them back to the detention camps in Libya”, said Klemp. 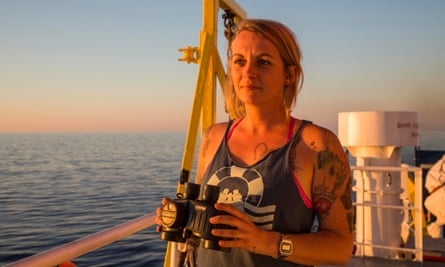 Non-state sea rescuers have long criticised the mass return of migrants to Libya by the Libyan coastguard in collaboration with EU member states. International organisations have accused the Libyan coastguard of mistreating people at sea or selling them off to militias at Libyan harbours after intercepting them.

According to the International Organization for Migration, more than 7,600 migrants have been intercepted so far this year and returned to Libya, a war-torn country where different political factions continue to struggle for power. Often confined to informal camps, the situation for migrants in Libya is desperate, with acts of systematic torture and rape long documented by human rights organisations.

Lea Reisner, a nurse and head of mission for the first rescue operation, said the project was anarchist at its heart, meant to bring together a variety of struggles for social justice, including for women’s and LGBTIQ rights, racial equality, migrants’ rights, environmentalism and animal rights.

The planning of the mission was carried out in secrecy between London, Berlin and Burriana, where the Louise Michelhad docked to be equipped for sea rescues. The crew feared that media attention could compromise their goals: if word had circulated that a project financed by Banksy would soon sail toward the central Mediterranean to rescue migrants, the European authorities could have attempted to thwart the mission. For this reason, Banksy’s team and the rescue activists agreed to release the news about the boat only after carrying out the first rescue.

The Louise Michelis the latest intervention by members of civil society seeking to prevent deaths in the Mediterranean. Other NGO rescuers have engaged in rescue activities this year but have been impeded by what they consider to be excessive and politically motivated inspections carried out by Italian authorities. Covid-19 lockdowns and restrictions have also affected sea rescue activities, with NGO crews unable to return to the central Mediterranean for the last several weeks.

So far in 2020, more than 500 refugees and migrants are known to have died in the Mediterranean sea, and the real number is estimated to be considerably higher. On Wednesday, 45 people – including five children – died when the engine on their boat exploded off Libya, in the country’s deadliest shipwreck this year, the UN said. More than 19,500 migrants have survived the Mediterranean crossing along the central maritime route this year and reached Italy or Malta.

Claire Faggianelli, an activist who prepared the Louise Michelfor its first mission, saw the project as a wake-up call for Europe. “We really want to try to awaken the consciousness of Europe and say: ‘Look, we have been yelling at you for years now. There is something that shouldn’t be happening at the very borders of Europe, and you close your eyes to it. Wake up!’” she said.

A Renegade Trawler, Hunted for 10,000 Miles by Vigilantes

Why I Choose to Live in Wayne National Forest

A boat-owner's perspective on hitchhikers