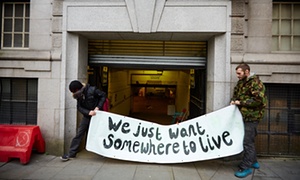 Ex-Manchester United captain Gary Neville said he was ‘relaxed’ about idea of homeless activists occupying his hotel development. Photograph: Christopher Thomond/for the Guardian
When Manchester United footballers Gary Neville and Ryan Giggs got planning permission to turn the historic Manchester stock exchange into a boutique hotelreplete with basement gym, spa and rooftop private members’ terrace, they envisaged opening it up to an exclusive and moneyed clientele. Instead, a group of homeless people with little or no money have moved in – with Neville’s blessing.

The hotel, which is undergoing extensive renovations before opening its doors to paying guests, was occupied on Sunday by a group of squatters and housing activists called the Manchester Angels. Instead of the usual response of property owners – rushing to court to obtain an order to get the uninvited new incumbents evicted – the famous ex-footballers who own the building have told them they can stay, not just for a few days, but throughout the coldest months of the winter. 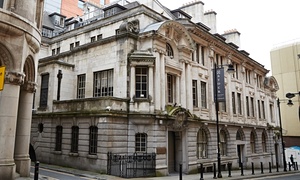 The stock exchange building in which Neville has allowed squatters to stay for the winter months. Photograph: Christopher Thomond/for the Guardian
Wesley Hall, 33, a housing and human rights activist who is leading the protest, said that he broke down in tears following a phone conversation with Neville on Sunday in which Neville said he had always supported homeless people and had no problem with the activists using the hotel to house people during the cold winter months.

“From my point of view, I’m quite relaxed about this,” Neville replied. He added that for the past 10 years he had offered support to homeless people he has seen on the street while walking through Manchester.

“Thank you so much – you don’t understand what you have done for us,” Hall said repeatedly to Neville.

Hall and his fellow activists say they can now act on their plan to provide a one-stop shop for homeless people – a roof over their heads, hot food, health checkups, benefit advice, workshops, signposting to other services and help with securing permanent accommodation. They are calling the initiative Operation Safe Winter, and have renamed the stock exchange the Sock Exchange, as they will be distributing clothing to the new occupants.

“We are going to do everything properly,” said Hall. “We have already drawn up rotas for cooking, cleaning and staffing the gate. Everyone will be able to have their own room and each person will be able to lock their bedroom door. We were expecting that as soon as Ryan Giggs and Gary Neville found out that we had occupied the building, they would try to get us evicted and that we would have to look for another building. Having a few months during the winter to work with homeless people without the threat of eviction hanging over our heads is brilliant.”

Giggs and Neville have embarked on a number of joint ventures together since they became teammates at Manchester United. Photograph: McPix Ltd/Rex
He said Neville’s only stipulation was that surveyors and other work people would be able to gain access to the building as and when they need to, which was readily agreed to by Hall. “We undertake not to cause any damage to anything and to leave the building in as good if not a better state than we found it in. I have ordered smoke alarms to keep the building safe. I even suggested to Gary that he might be interested in employing some of the homeless people who are living here as labourers to help with the redevelopment work on the hotel,” he said.

The former stock exchange in Norfolk Street in central Manchester was built in 1906 and is Grade II listed. Neville and Giggs have permission to turn it into a 35-bed hotel with basement gym and spa, also featuring a rooftop private members’ terrace and a ground-floor restaurant and bar.

The first regional stock exchanges opened in 1836 in Manchester and Liverpool, linked to the one established in London more than a century earlier. Its early days were driven by the railway boom and the need to raise capital in the north of England. The Manchester Guardian described the mood at the time as “Joint Stock mania”. The exchange listed railway companies as well as insurance, minerals and manufacturers. The building was designed by the Bolton architects Bradshaw, Gass and Hope, and cost £86,000 to build. 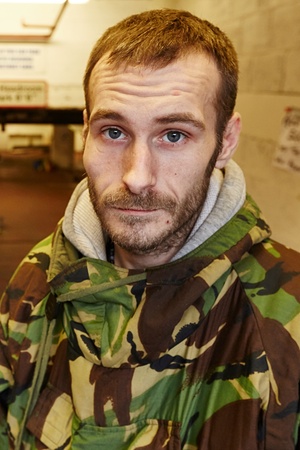 Wesley Hall said he had expected his group to be evicted from the property. Photograph: Christopher Thomond for the Guardian
The successful occupation is second time lucky for the activists. During the Conservative party conference held in Manchester earlier this month, they occupied another prestigious Grade II-listed building. As the prime minister made his keynote speech about a new house building programme to develop 200,000 new homes, the activists aimed to send a strong signal to the government. They argue that while this initiative might help those on middle incomes, it will not tackle the problem of homelessness and the hundreds of thousands of empty homes they say should be used to provide short-term accommodation for homeless people.

The activists say that homelessness in Manchester has risen by 150% in recent years and that the local council has penalised rough sleepers who have pitched tents in the city centre. According to the latest statistics published by Crisis,280,000 people in England approached councils last year seeking assistance, while 7,581 slept rough on the streets of London, a 16% increase on the previous year. The latest figures released by the Empty Homes Agency says that there are currently 610,000 empty homes across the country.

Hall is already considering how Christmas will be celebrated. He is hoping to enlist the culinary expertise of celebrity chefs to provide a festive lunch to remember. He asked anyone who would like to help out to contact him on Twitter.

“I can’t quite believe it. The whole thing is a dream come true,” he said. “We’ve got a real opportunity to do some intensive work with homeless people and make a big difference to their lives.” 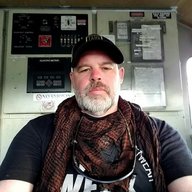 Awesome possum,hope it works out well for both groups.Could be an awesome beginning of a good thing.

These men earn obscene amounts of money and so it probably is no real skin off their noses to ignore squatters in their property. But the fact that they have actively said they're OK with it, not just turned a blind eye is where it makes this a great story.

I think if more high profile people actually did stuff off their own back to help the homeless then that good attitude will hopefully filter down to everyday people.

damn, that is an unusual story! thanks for sharing it. hard to imagine owners being cool with squatters like that, gives me hope that (maybe) not all landlords are shit heads

The anarchist squatters of Manchester