News & Blogs Punk Island is a celebration of community, diversity, and rage (1 Viewer)

PUNK ISLAND IS A CELEBRATION OF COMMUNITY, DIVERSITY, AND RAGE 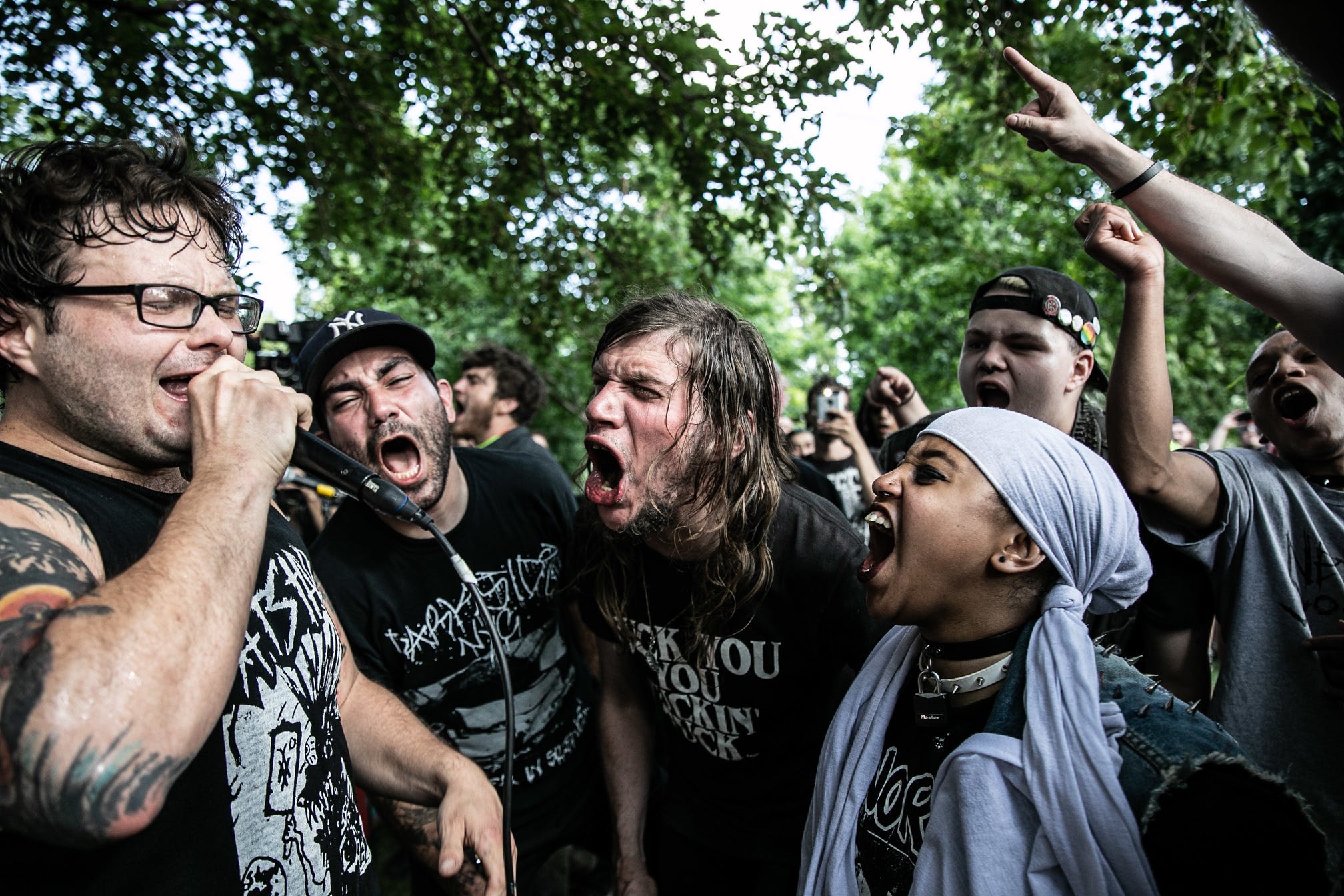 Randall’s Island in NYC isn’t usually bursting with heavy guitars vibrating through amps and leather-clad groups of metalheads moshing on grass, but today, it is. For just one day, the park at the edge of the Ward’s Island Bridge has been transformed into Punk Island, a free all-ages music and zine festival with hundreds of DIY punk bands and progress programs ranging from self defense classes to prison letter writing. It’s not about what band you’re here for — it’s about what kind of energy you’re bringing. 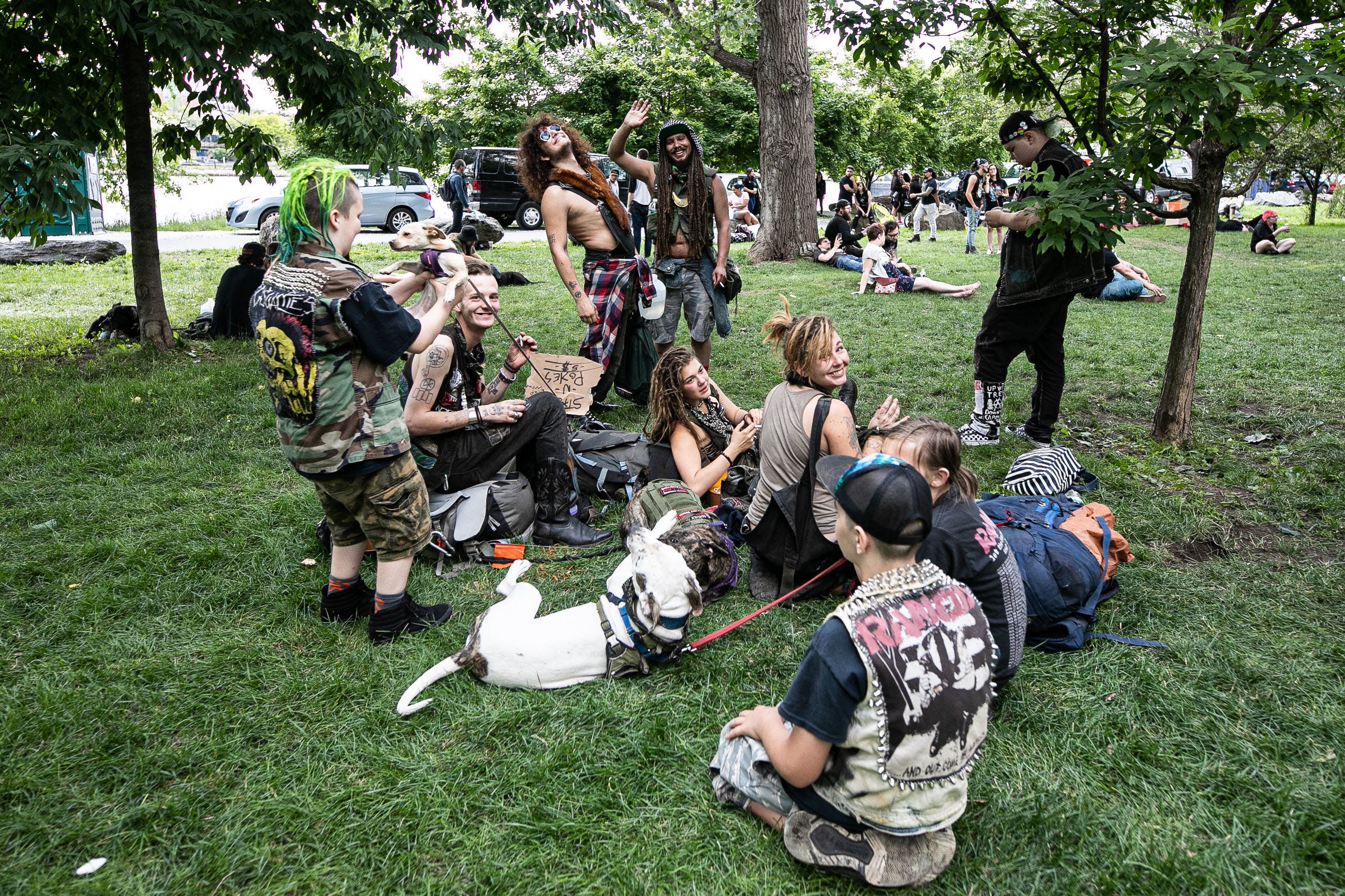 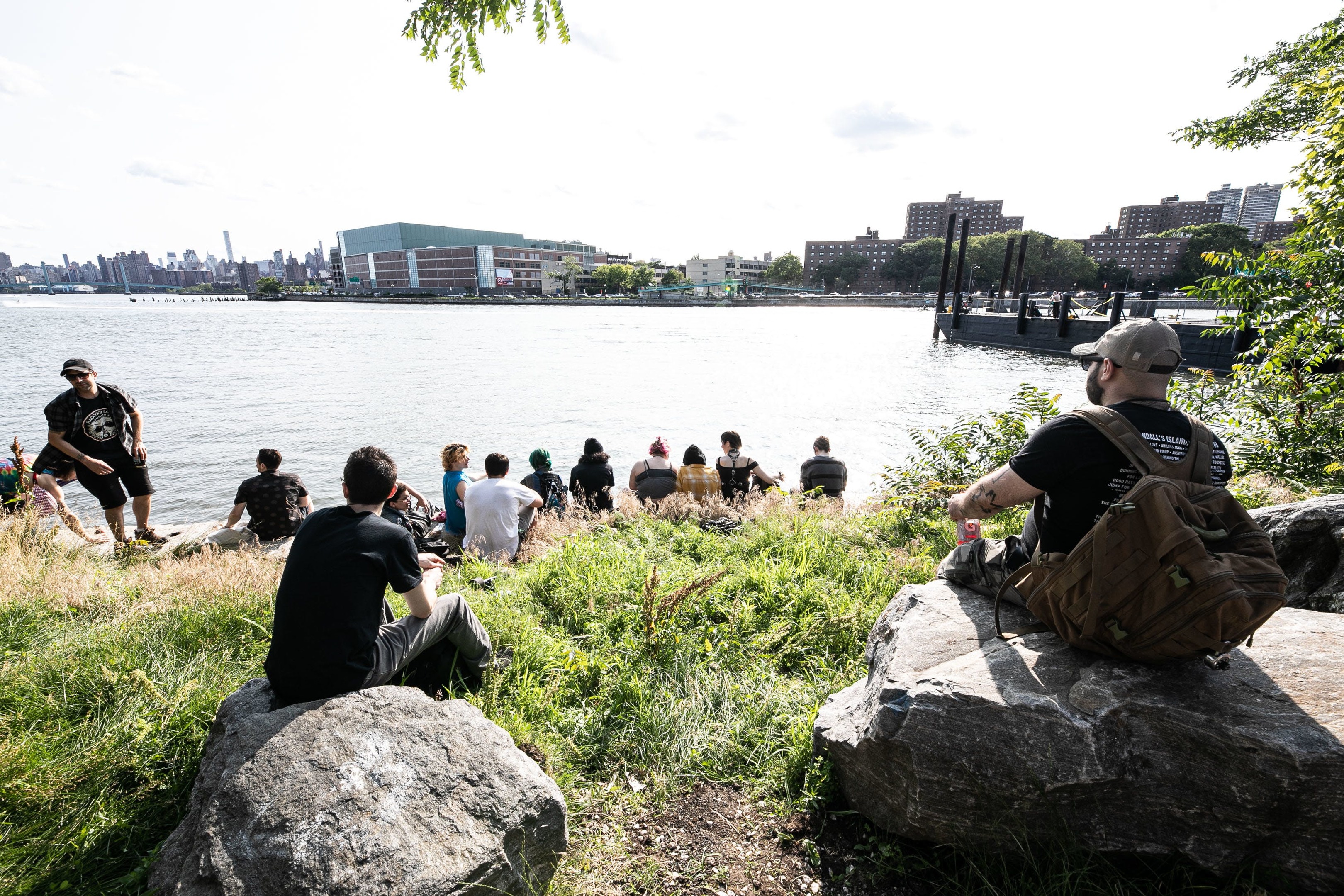 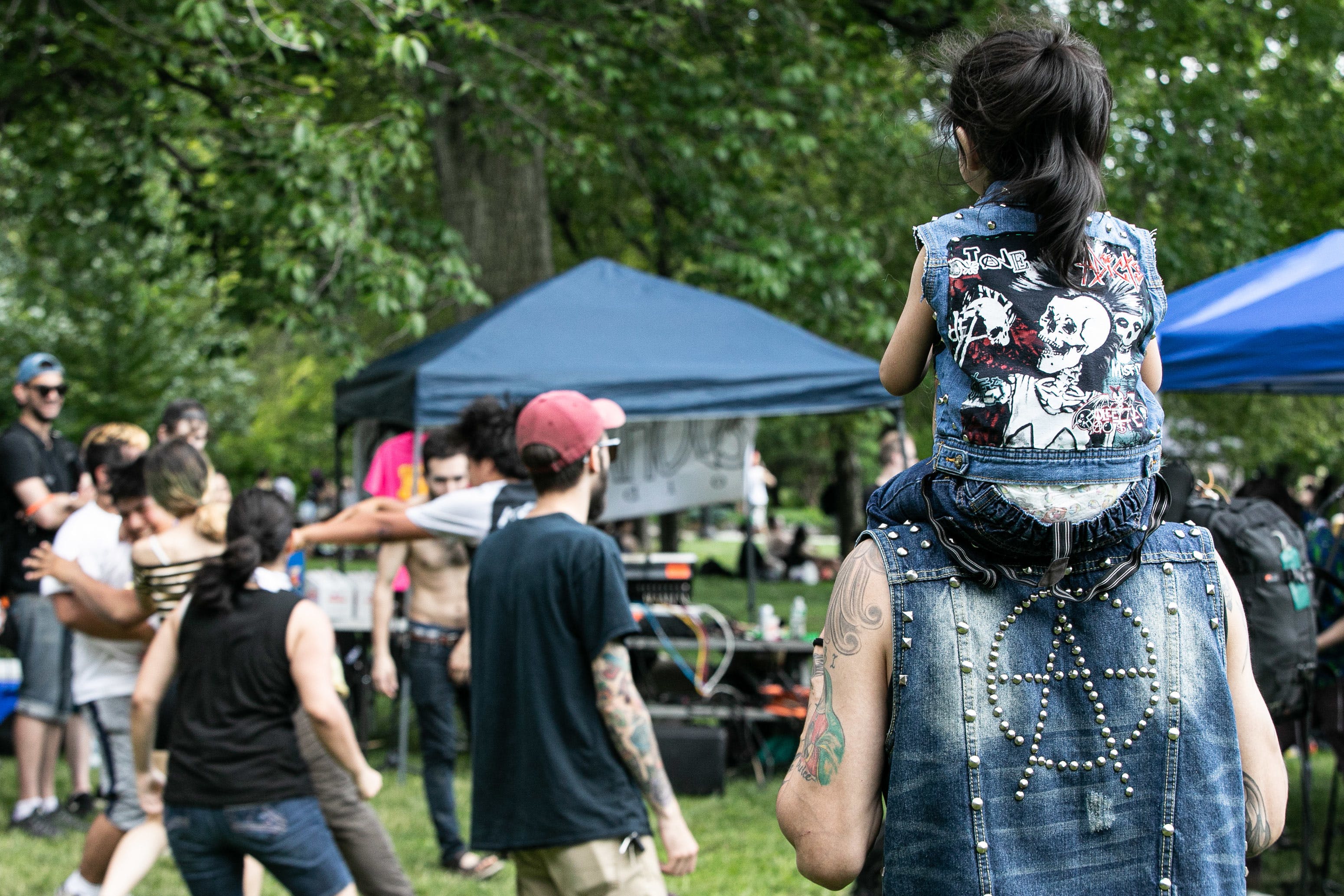 With nine stages and 20 minute sets throughout the day, there are a lot of bands. Everywhere you look, though, your eye will probably catch a Choking Victim patch with the iconic No Gods / No Managers album art. The band from which Leftöver Crack would later spring was announced last minute and attracted even more punks to catch their crazy set at 7:30 on the Dispatches from the Underground Stage. Other headliners include folk punk rockers Days N Daze and cabaret punk gang World/Inferno Friendship Society. Aside from those known names, the island overflows with DIY bands from all over, and the stages help categorize the genres. 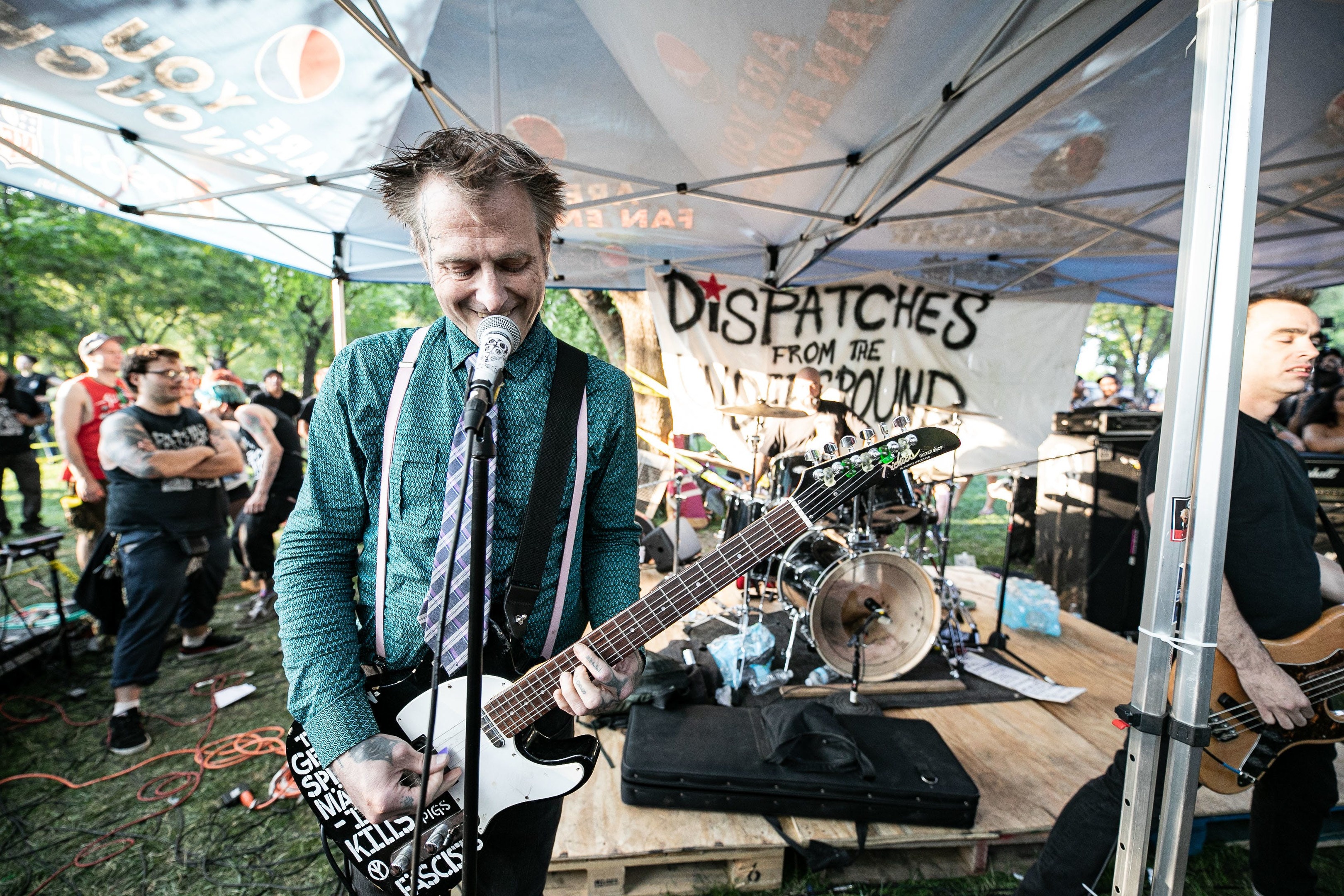 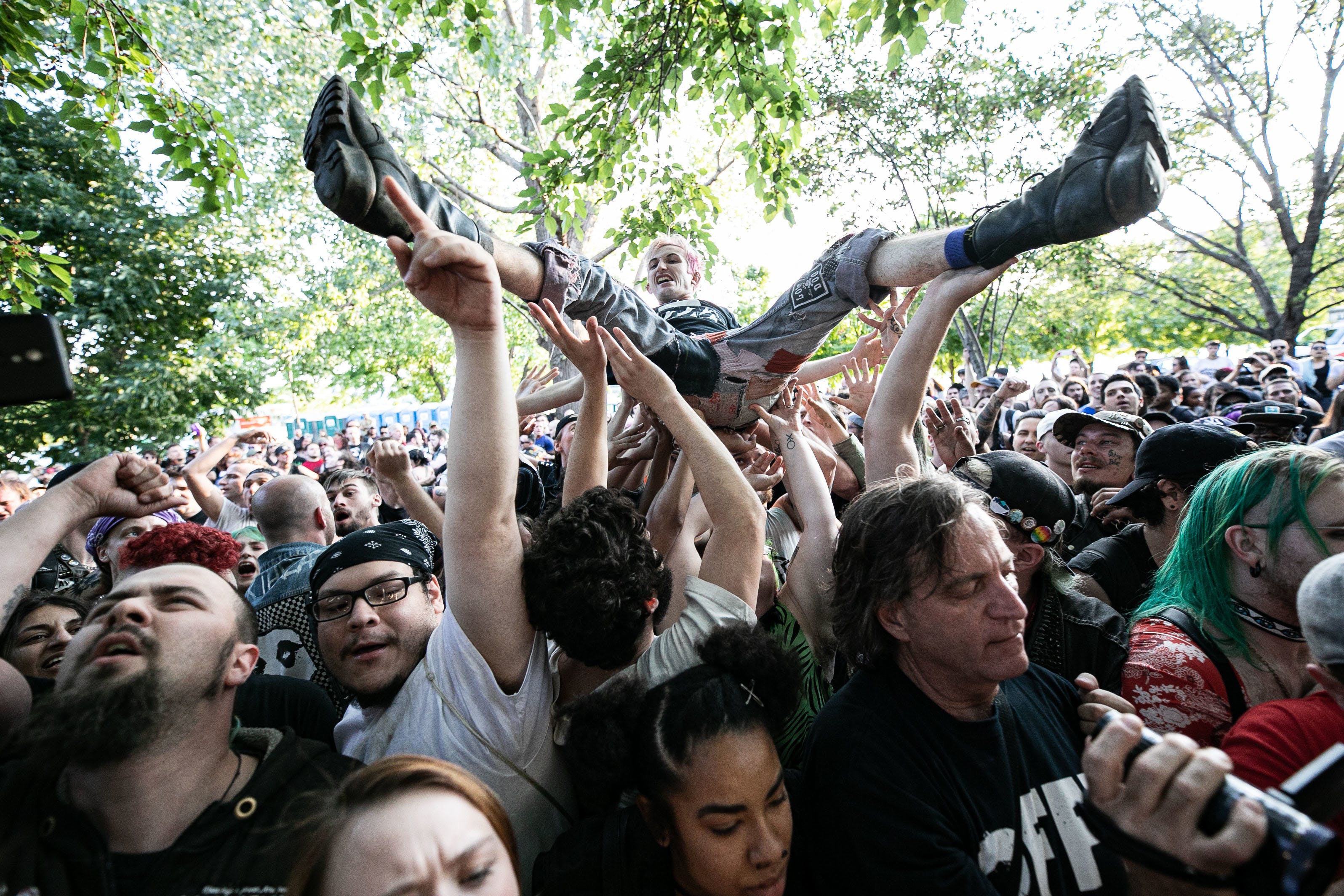 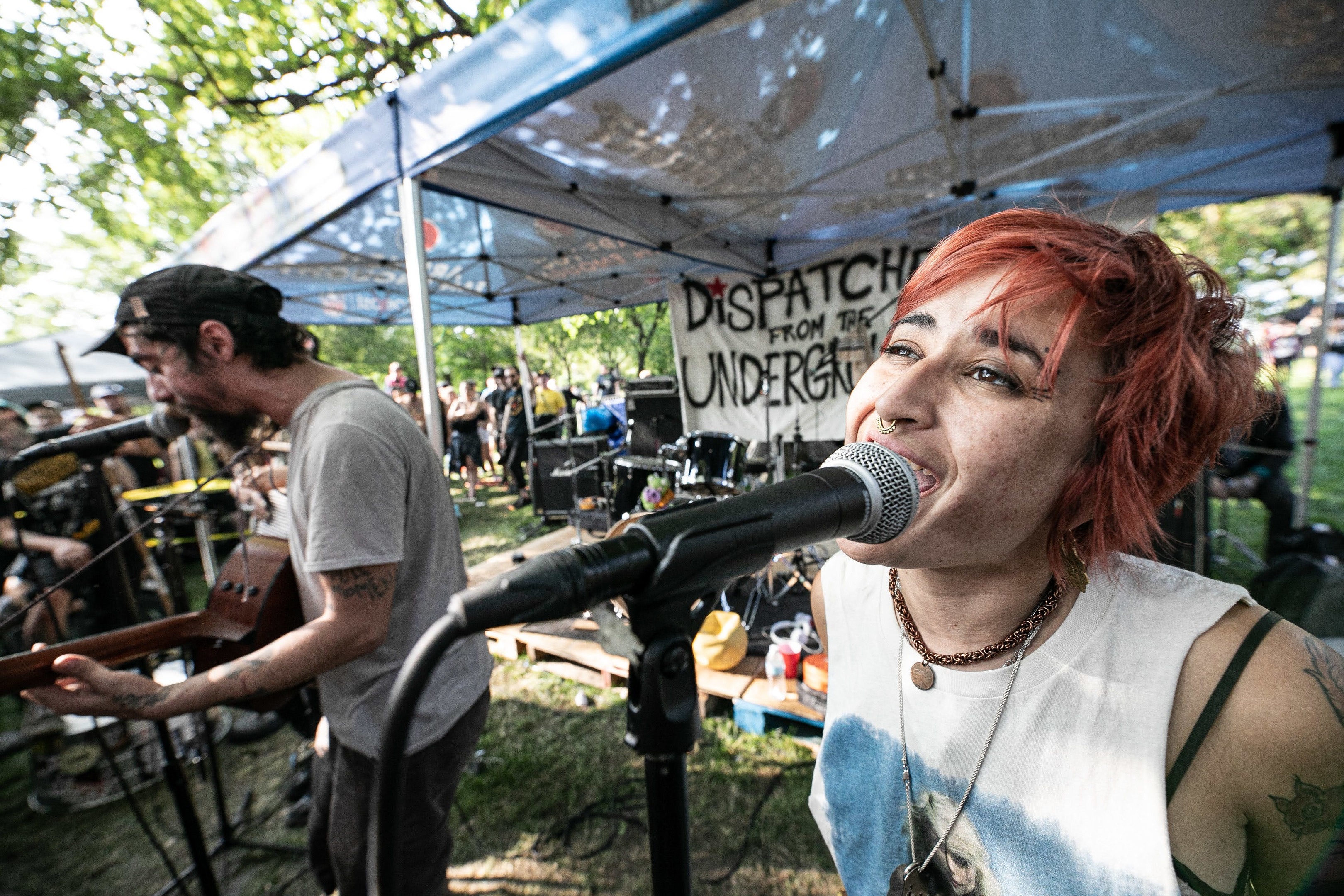 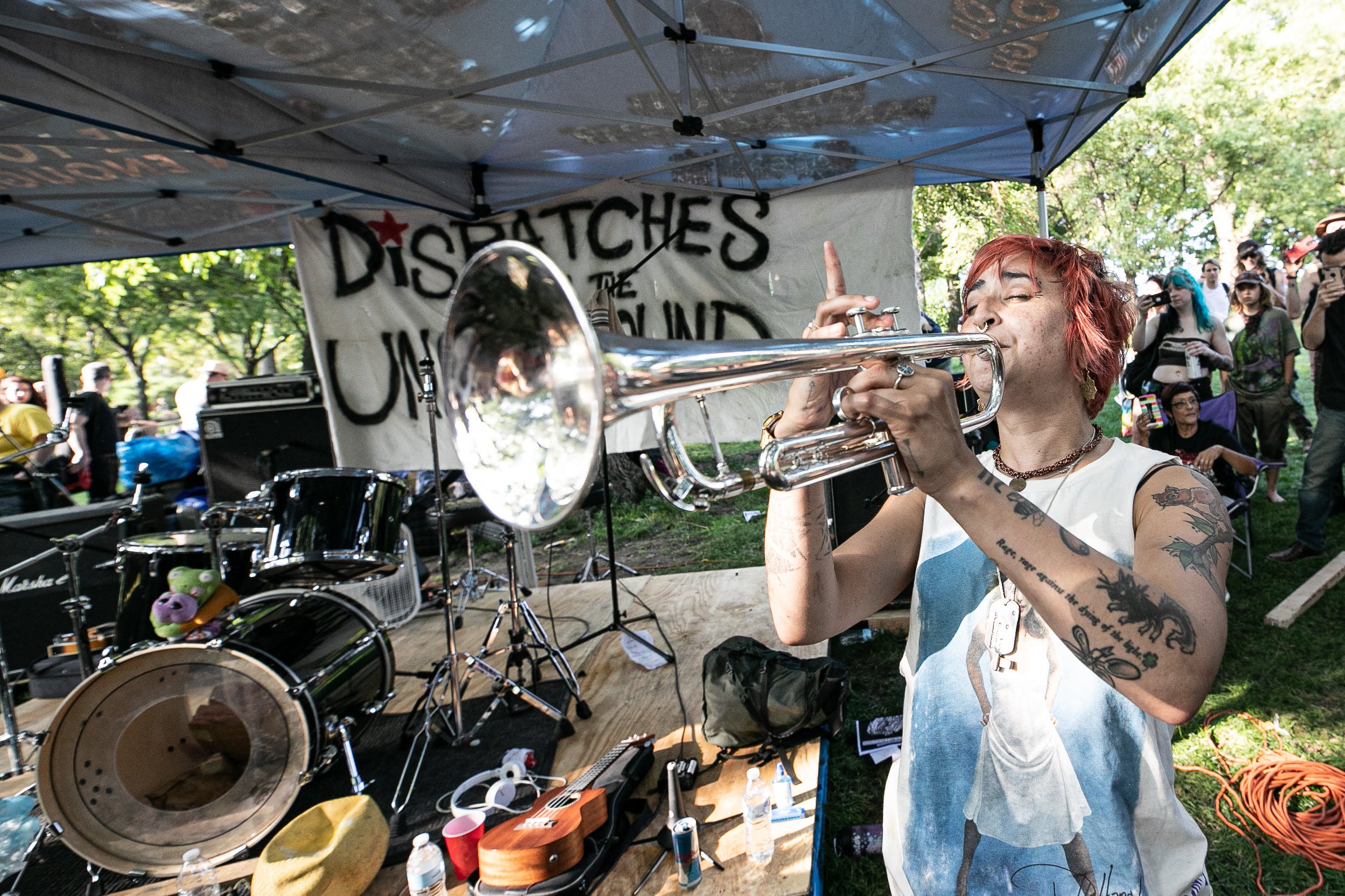 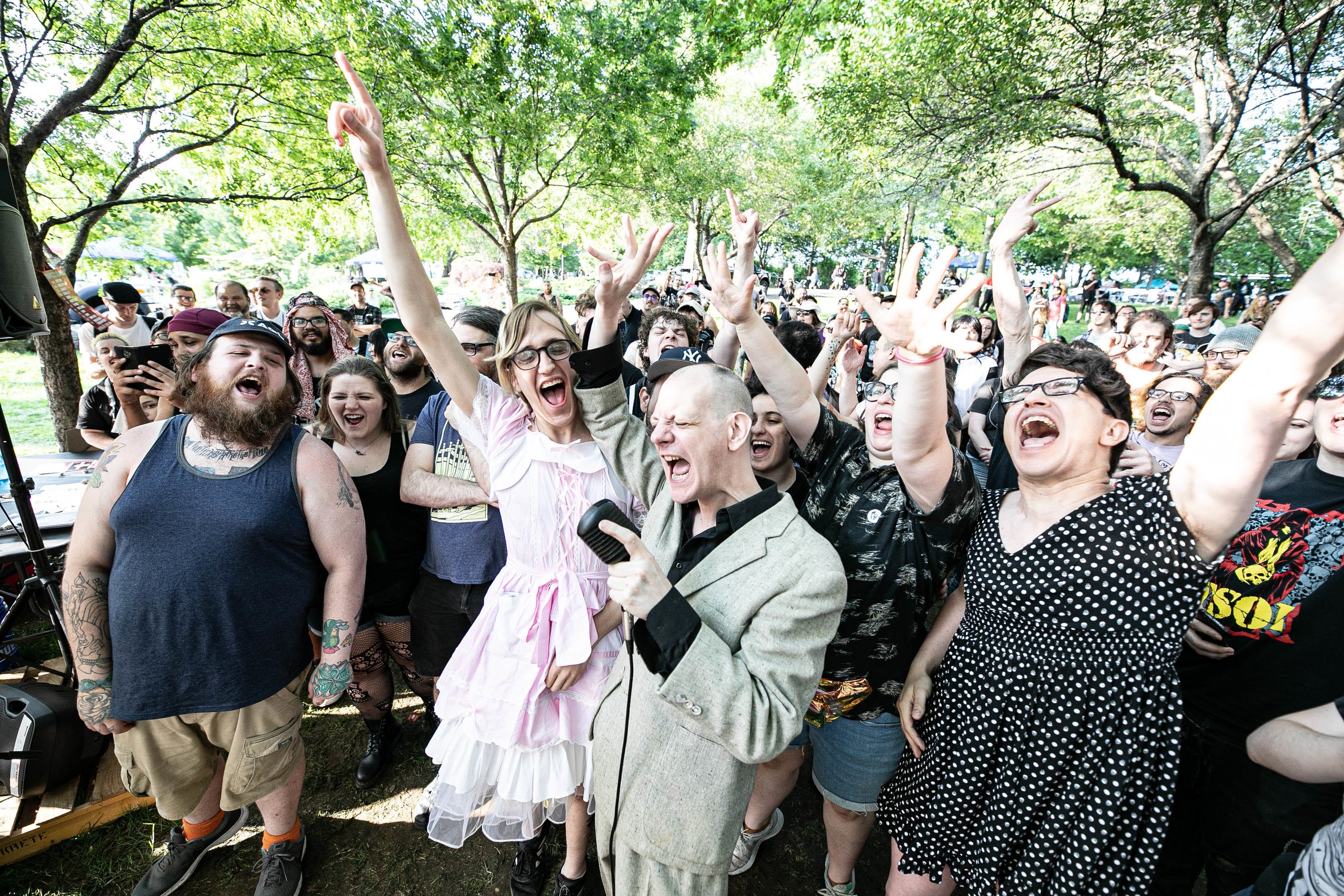 Dispatches from the Underground, for one, sheds light specifically on Latin American punk, hardcore, and metal. Bogota four-piece Perdixionyell in Spanish to heavy, fast rhythms in a sound that they label as street noise. Immigrant hardcore quintet Lakras deliver an akin set of sonic chaos and aggression, and even some cool toddlers enjoy it from their parent’s shoulders. 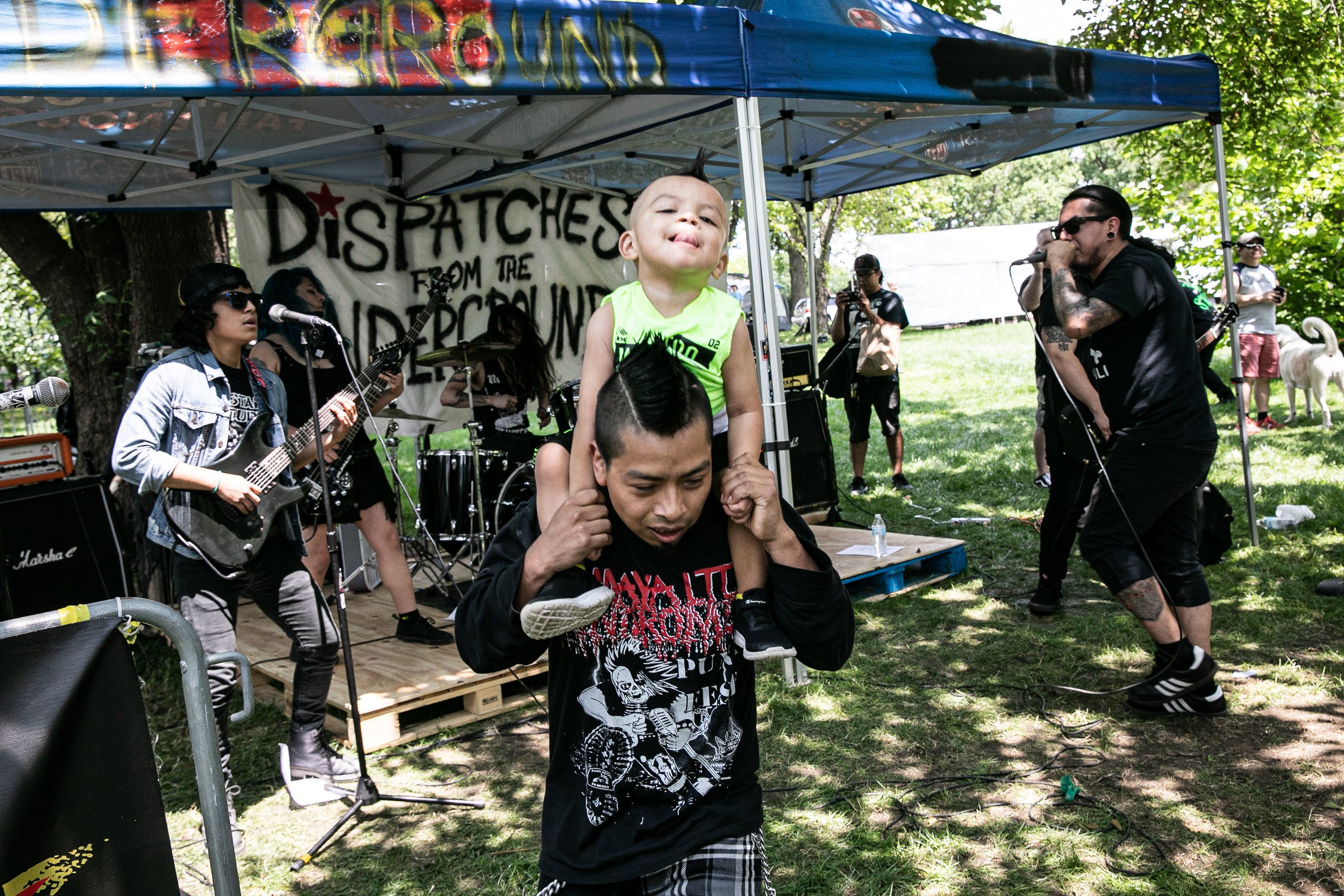 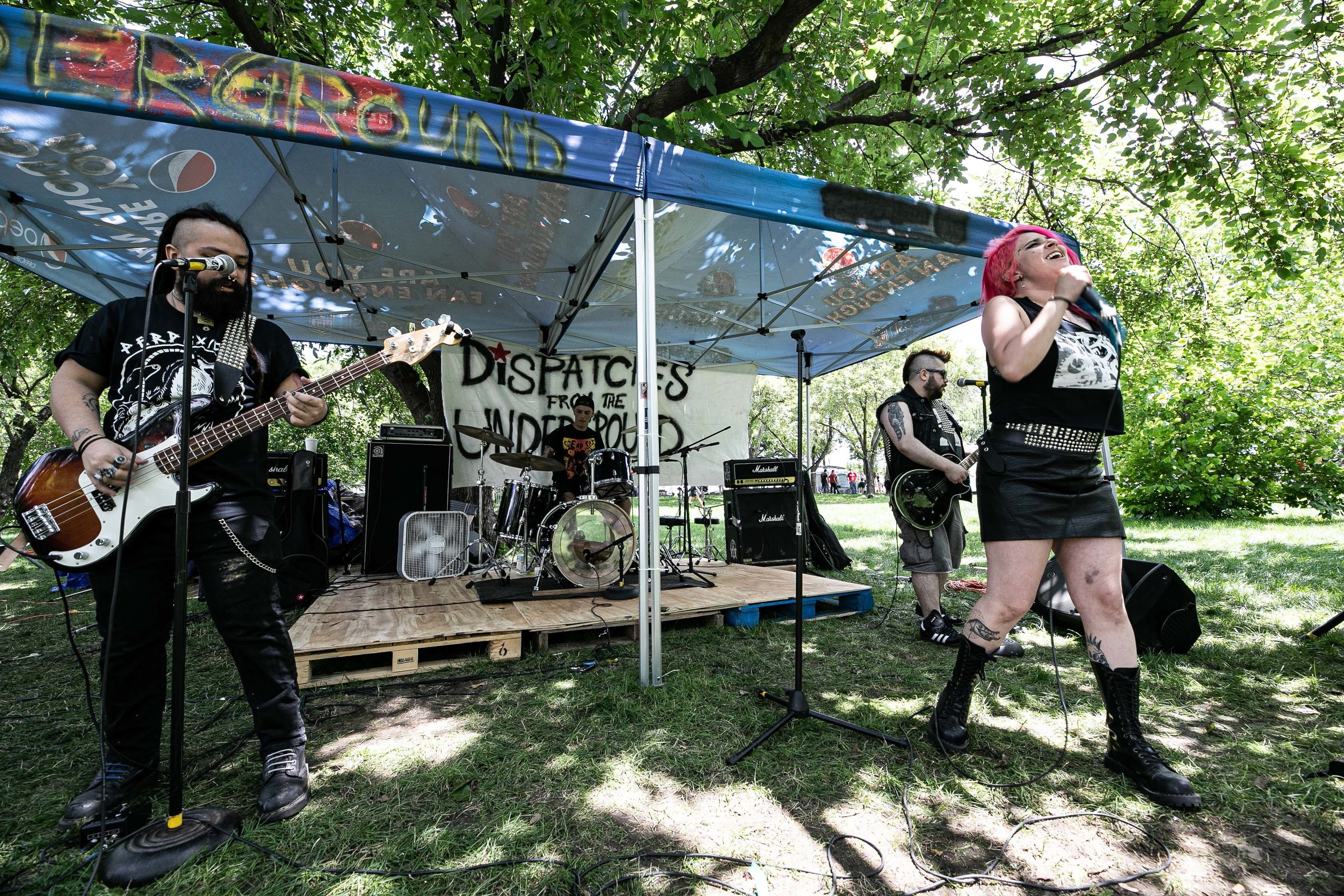 The Brooklyn Transcore stage gives a platform to LGBTQ+ musicians. Punk Island is not only a music festival, but a safe haven for minority communities and a chance for them to assert themselves in the music scene instead of being underrepresented and overlooked. Bushies, the self-described “band of gays,” demand attention with some catchy tunes to sway to. Another notable act that take this stage is the young punk duo Dental Damage with passionate jams that center on identity and justice. 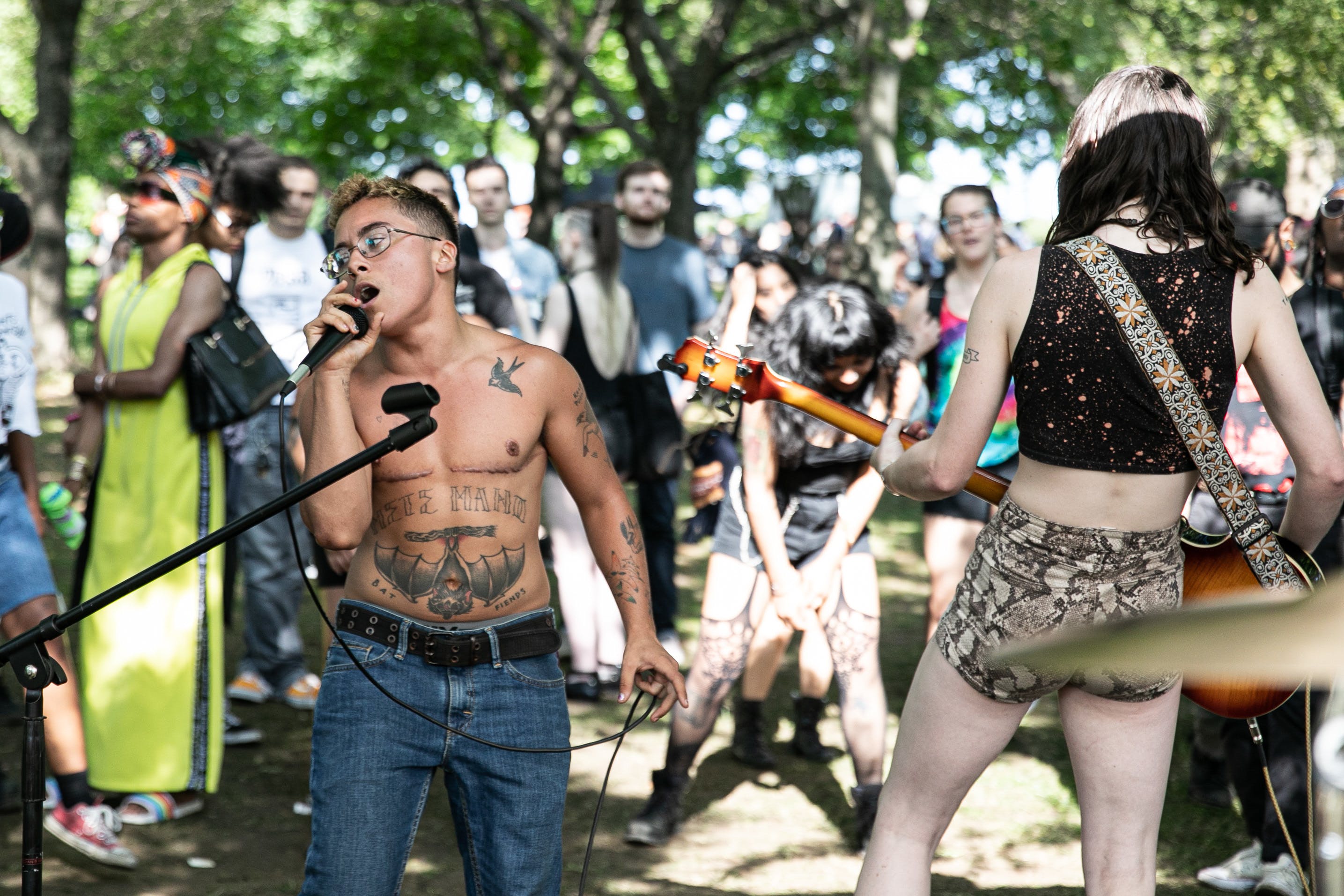 The punk energy reverberates through both the music and the attitude. Walking past stages, you’ll probably catch someone mid-speech, yelling, “FUCK THE GOVERNMENT! FUCK THE MILITARY!” or you’ll spot a “Punch your local Nazi” T-shirt. NYC four-piece Cop/Out brings this politically-charged atmosphere to the Hoosatron stage with what they call “queer commie punk.” They rage with taut rhythms and wise proclamations expressed through theatrical yells. 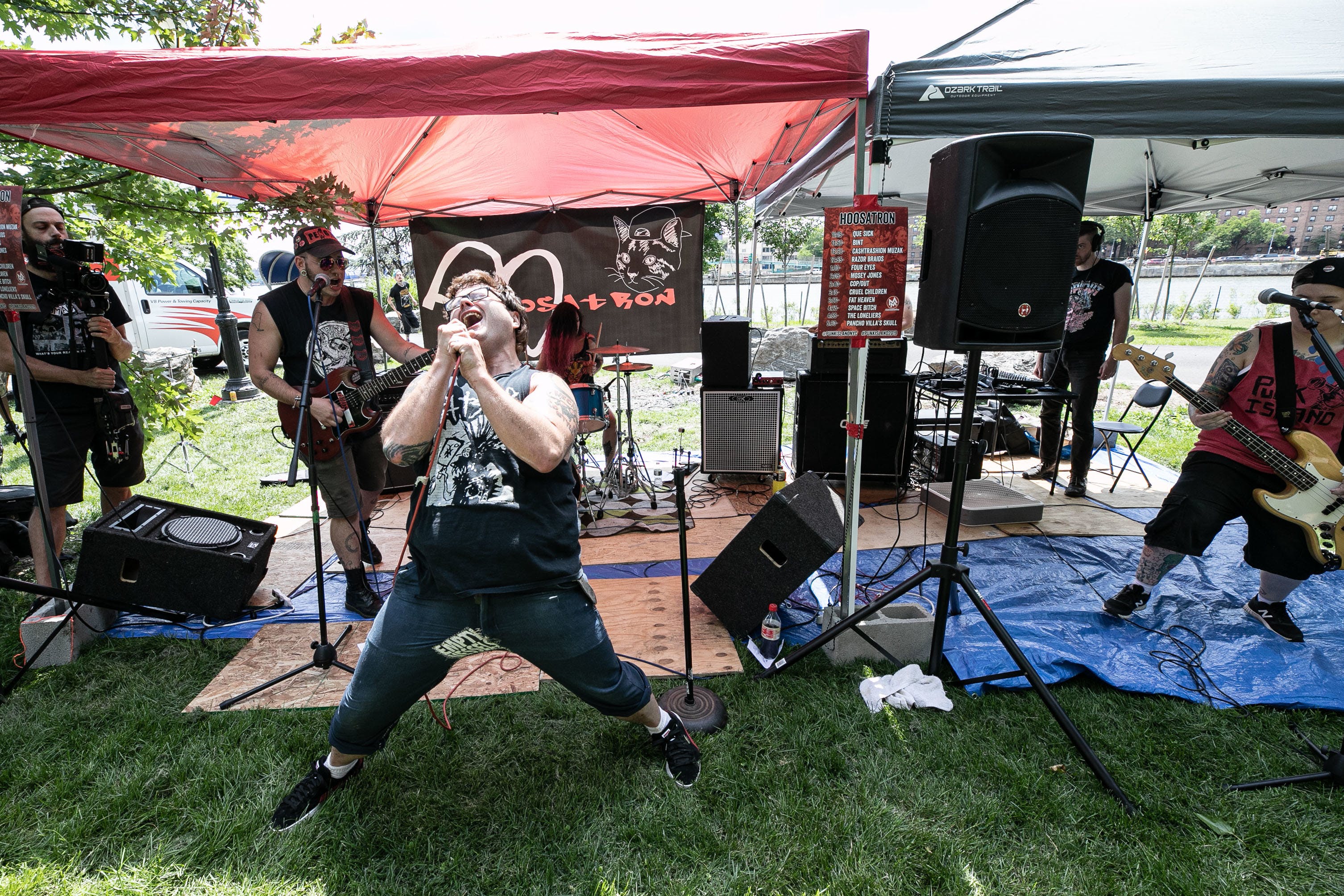 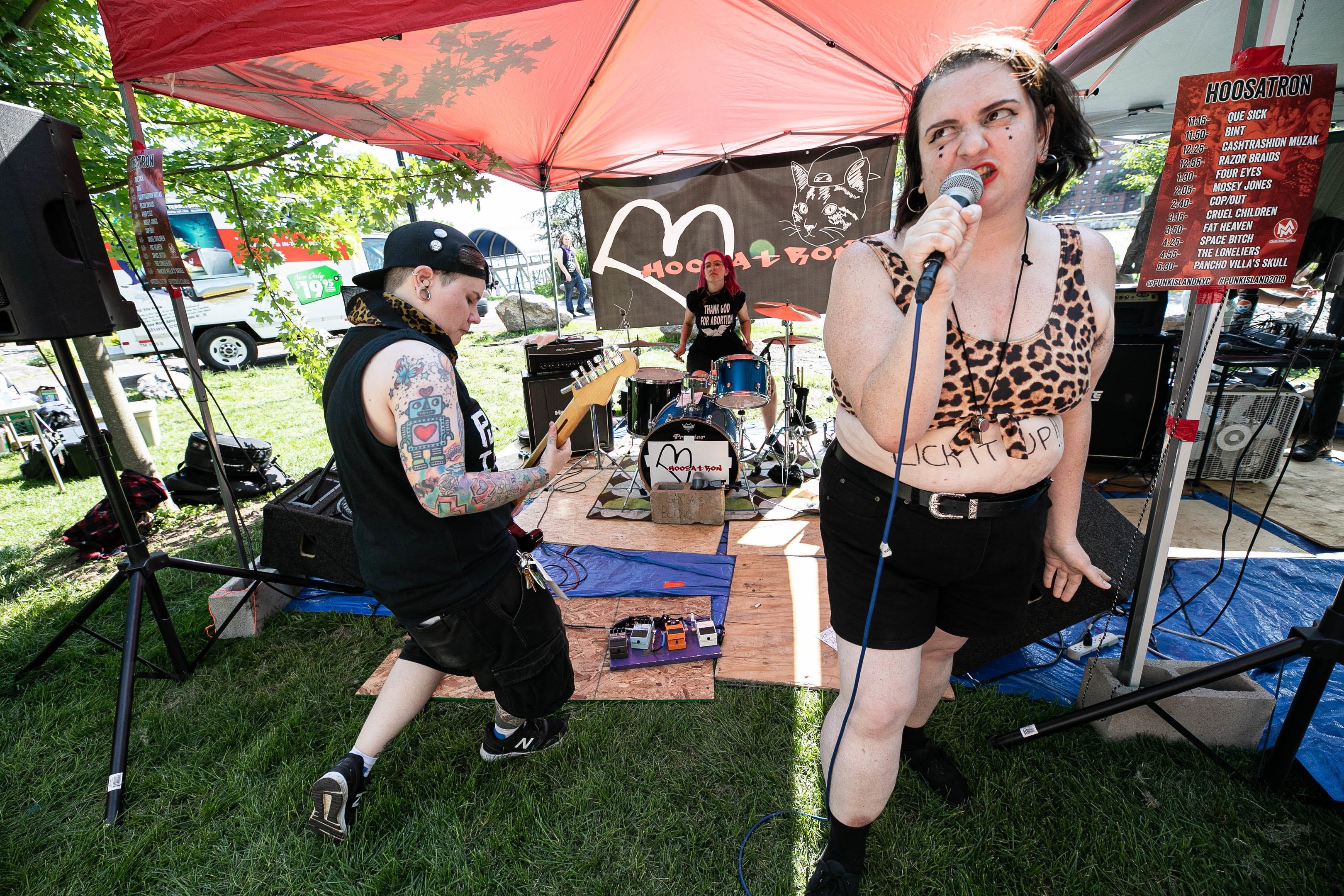 The Basement Dwellers stage can be heard from any part of Randall’s Island. Some of the loudest acts bring their aggression with intense screams and heavy breakdowns, including Brooklyn hardcore bands Nerveshatter and Despairwolf. No matter who’s playing at that stage, a mosh pit will automatically be summoned. 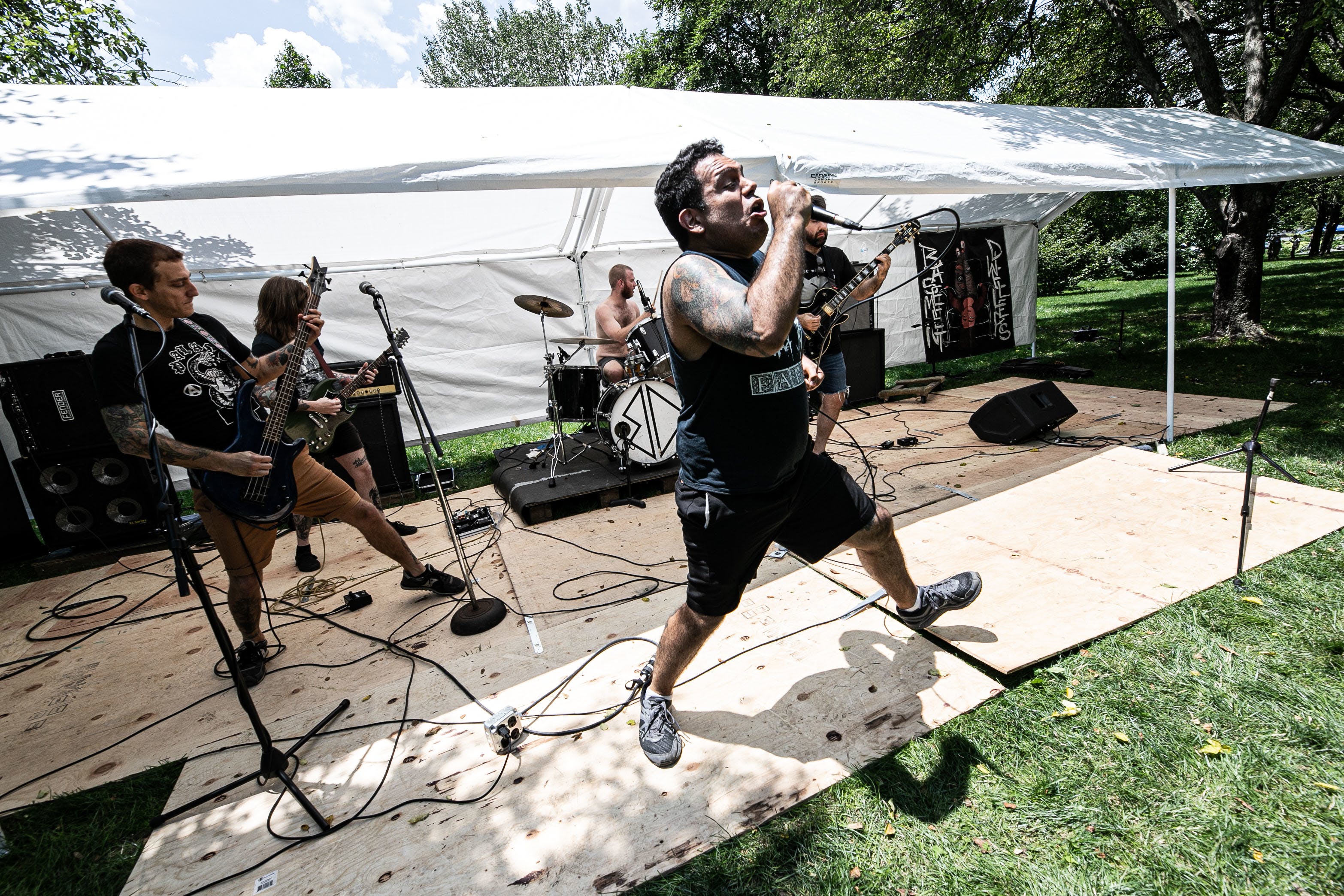 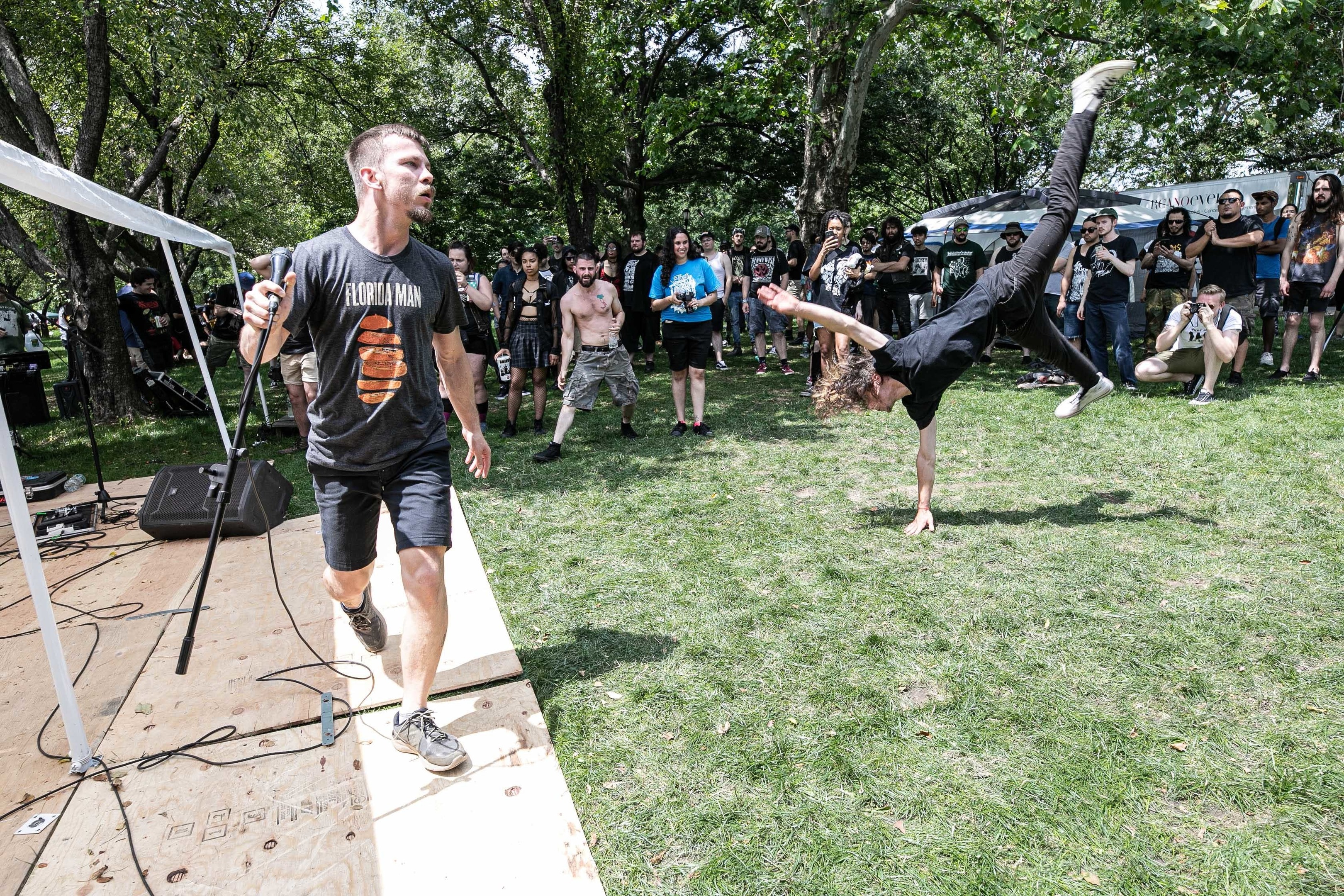 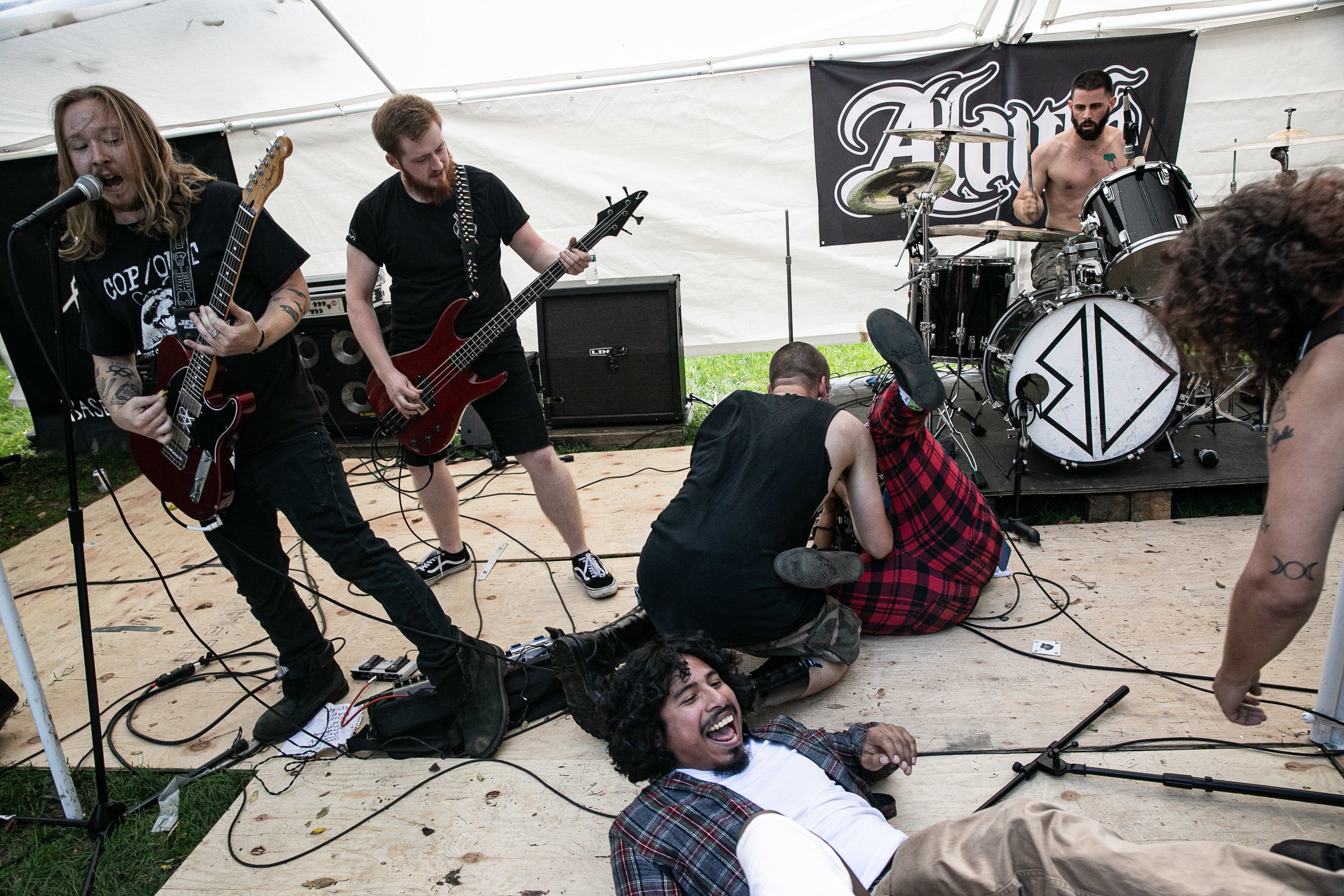 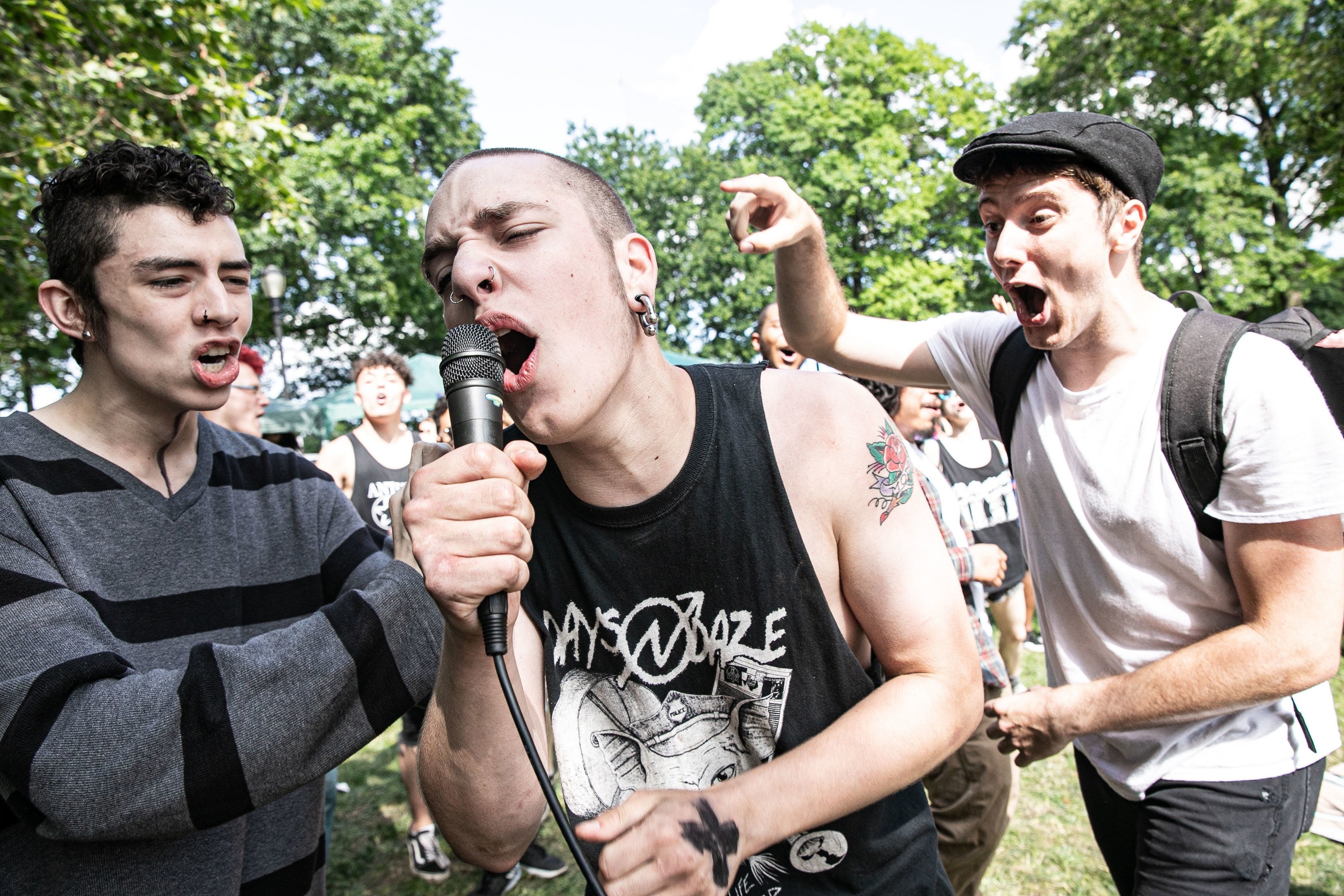 The Gilligan stage, similarly to the Brooklyn Transcore stage, focuses on inclusivity with a batch of some great LGBTQ+ and POC musicians. The 1865 is a highlight, blending blues and punk, and using their platform to openly speak out about black history and the black experience. Their music explores the life of 1865 through an oppressed perspective, creating riveting narratives through lyricism with the instrumentation working as the scene-setting backdrop. 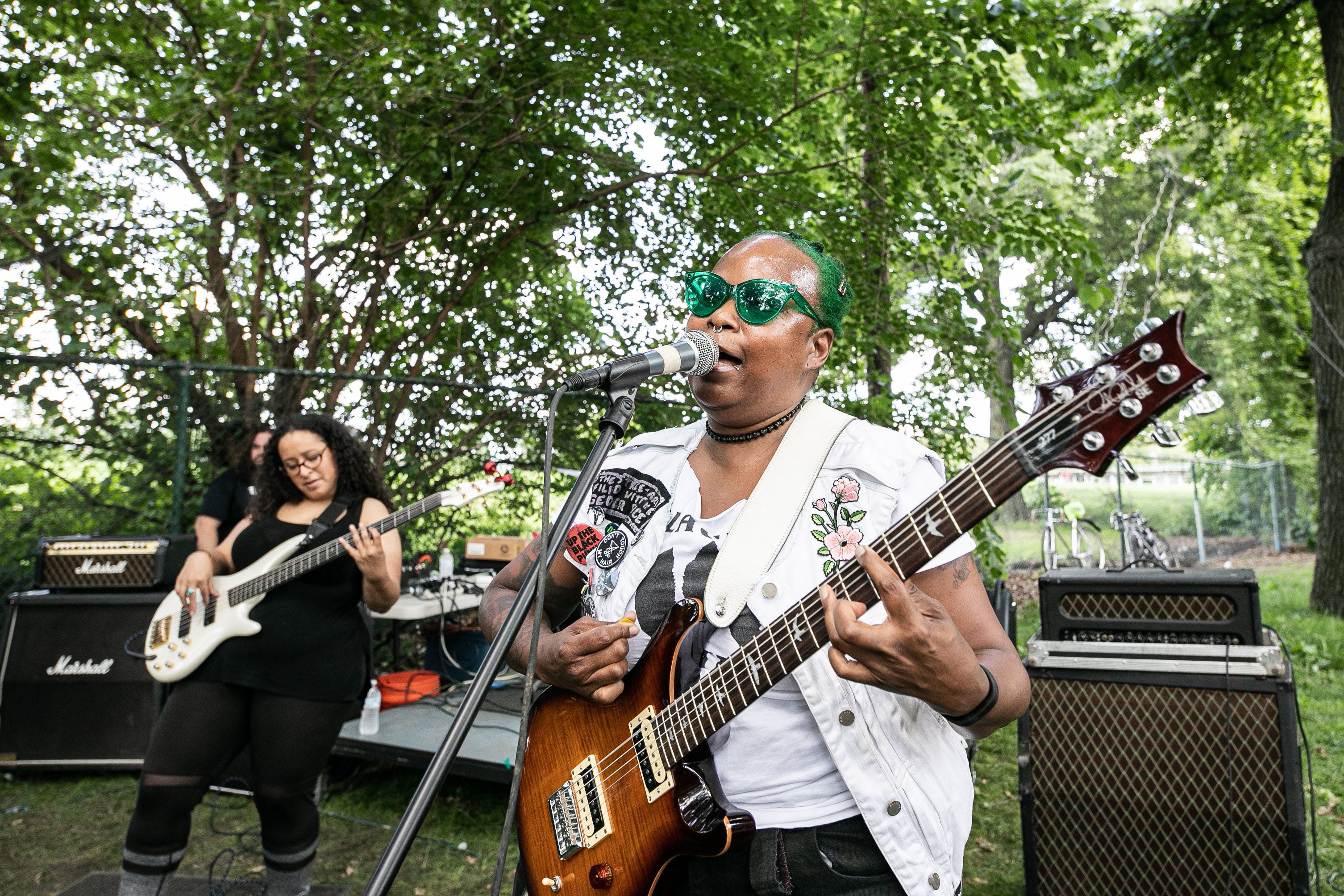 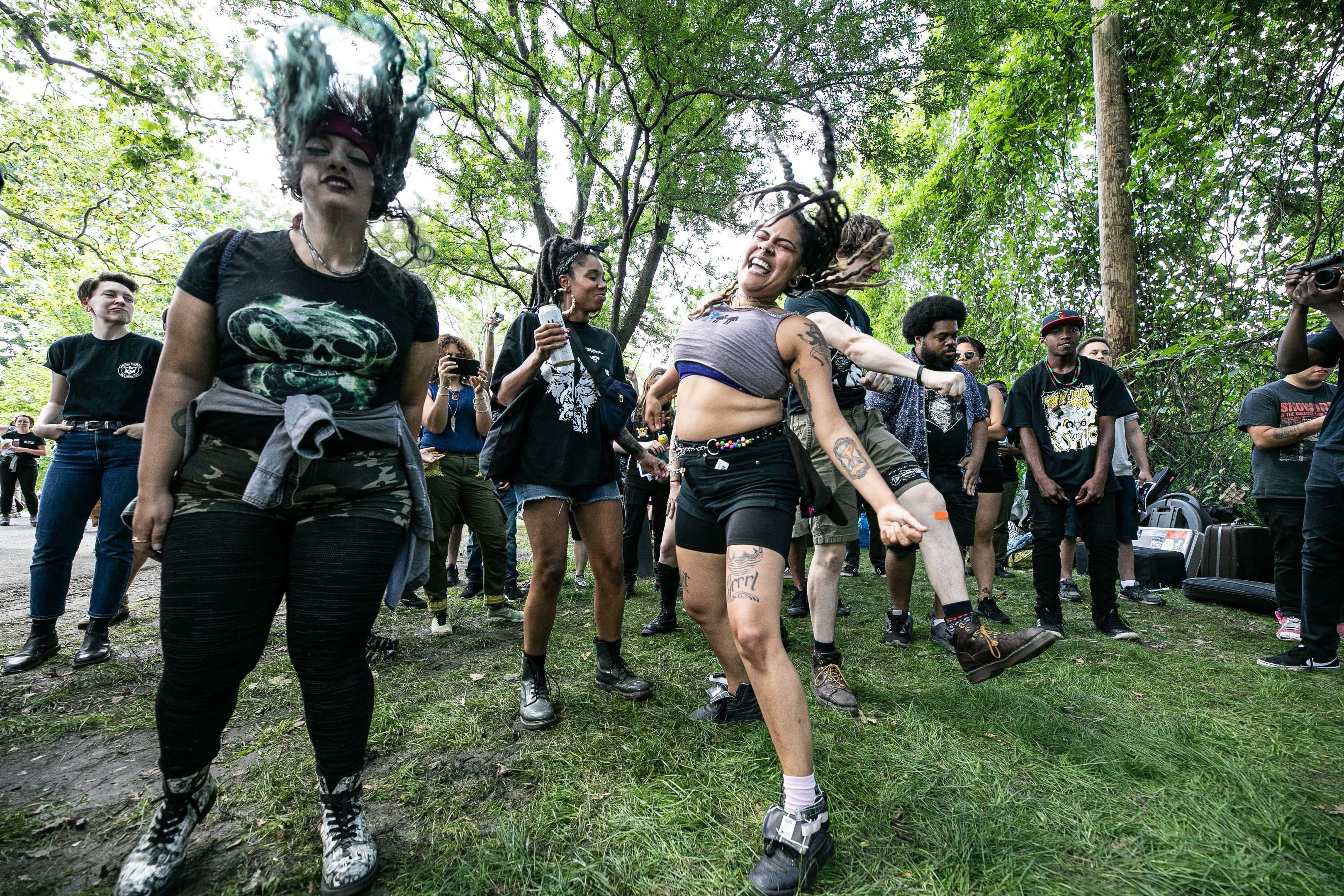 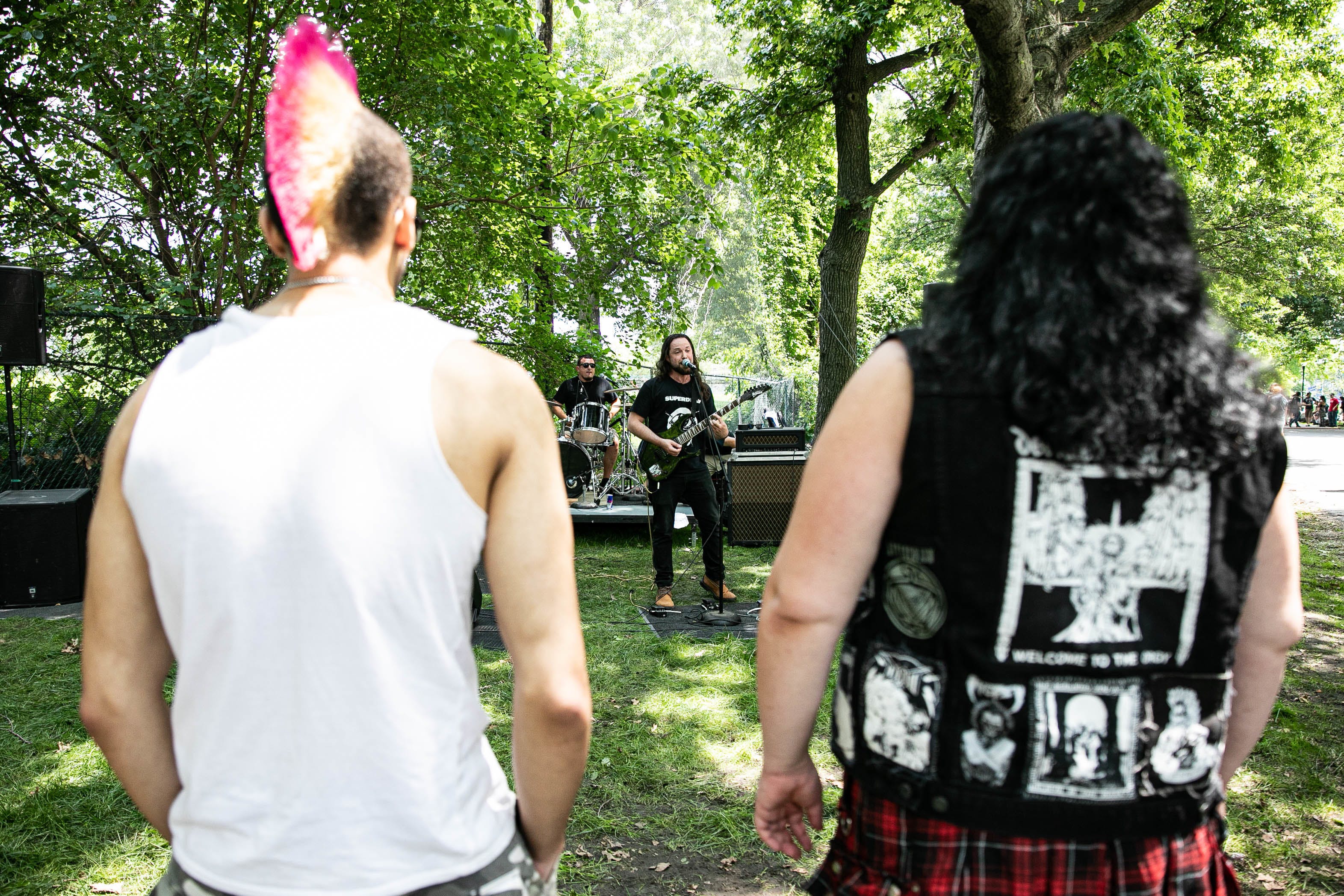 By the time Punk Island comes to an end, the sidewalk on the bridge is highlighted in black as all the goths return home after a long, sweaty day of expressing themselves. Unfortunately, this community-gathering is over, but all of the fans and bands will go back to their usual local scenes and repeat the process anyway. Till next year, Punk Island.

Punk Island is a Celebration of Community, Diversity, and Rage — Kerrang! 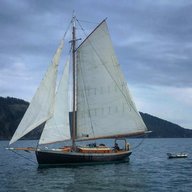 I want to make it to all these festivals next year! And all the rest I can this year ha!
Fucking awesome.

Cheers,
Crow
You must log in or register to reply here.