Radio garden - radio streams from around the world (1 Viewer)

I'm totally loving on this at the moment. You can zoom around the globe listening to live radio from all over the place.

Here's a article explaining it a bit more.

Want to tune in to the world’s radio stations? Grow your listening with Radio.Garden

A new interactive online website allows users to explore radio stations around the world – as they broadcast live. It’s a timely project that celebrates human communication across borders 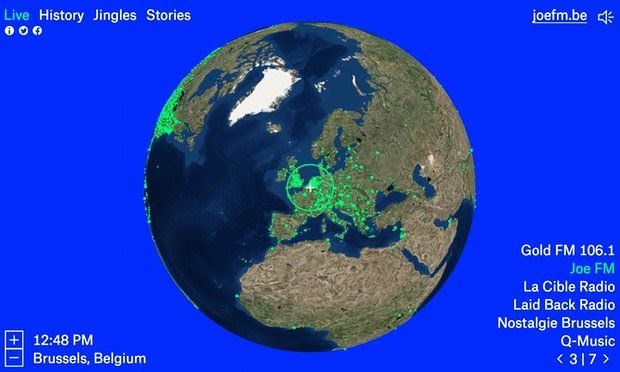 Radio.Garden … a crash course in global radio. Photograph: Radio.Garden
Even in the digital age, it’s an experience familiar to many: scrolling through a radio tuner, jumping from crackled voices to clearcut sound, shipping forecasts to pop tunes, in the hunt for a station you want to listen to.

Now, you can experience this on a global scale, hopping thousands of the world’s radio stations. Launched this week, Radio.Garden is an interactive website that presents Earthcovered in tiny dots, each representing a radio station that can be tuned into at the click of a button.

With global tensions high, anger at the political establishment and fake-news dominating social media discussions, it feels like there has never been a better time to enable people to reflect on human communication on an international level. Radio.Garden allows the world to be explored through its sounds, and while some seem foreign, many seem familiar.

At the time of writing, Classic FM Sofia is beaming out a romantic symphony, Mali Jet is blasting out fast-paced hi-life, and over on the west coast of the US Rockabilly Radio is, well, living up to its name. 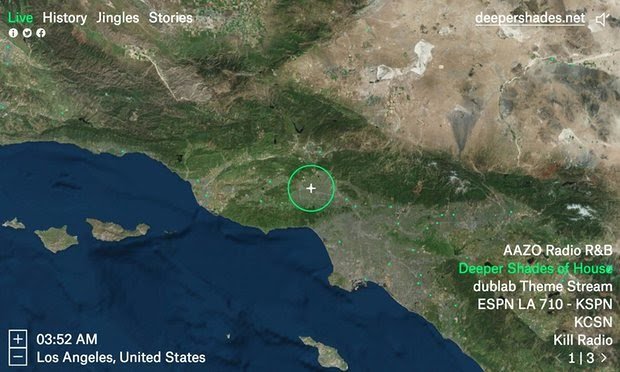 Users can explore stations almost anywhere in the world. Photograph: Radio.Garden
After jumping between talk radio stations in more languages than I can count, I paused on Richmond Indie Radio, which has just played Marquee Moon by Television, before jumping over to ESPN Tucson, to hear a discussion of the Rams game, before spinning back to Europe, where Munich’s Hardest Hits is sounding a little like the UK’s Magic FM.

One enlivening tool lets listeners hear international radio jingles, “a worldwide crash course in station identification”, as well as the option to listen to audio clips from radio discussions around the world.

Studio Puckey and Moniker, which were approached by the Netherlands Institute for Sound and Vision to develop an installation for a research project about radio called Transnational Radio Encounters, which focuses on radio that crosses linguistic and geographical barriers

“Conceptually, what was really important for us was to leave out the city names, countries and borders and just leave you with this naked Earth,” says Jonathan Puckey, part of the team that created it. “Then you just have these pin points transmitting radio.”

It’s not a comprehensive collection of the world’s radio stations, but currently features more than 8,000, with more being added every day. Stations that wish to be featured are invited to get in touch.

Since it launched, the site has gone viral.

“This was a big surprise for us,” says Puckey. “We have a crisis meeting tomorrow! Since this morning I’ve had 350 emails from different stations that would really like to be on it. I had the same again the day before. Were going to spend a weekend adding as many new stations as we can.”

Puckey says it was only after the site launched, when he was reading the social media comments about it, that he realised what an emotive project it was. “On Reddit, it prompted a really sweet discussion, with people talking about their first contact with radio, or grandparents who had worked in radio during the second world war.


“It’s not a political statement. But it can be used as a tool to start these kinds of discussions,” he says.

Yes it's lush, I'm totally addicted.
You must log in or register to reply here.

Listicle prepping + What are some funny quandries you churn over?