The anarchist squatters of Manchester (1 Viewer) 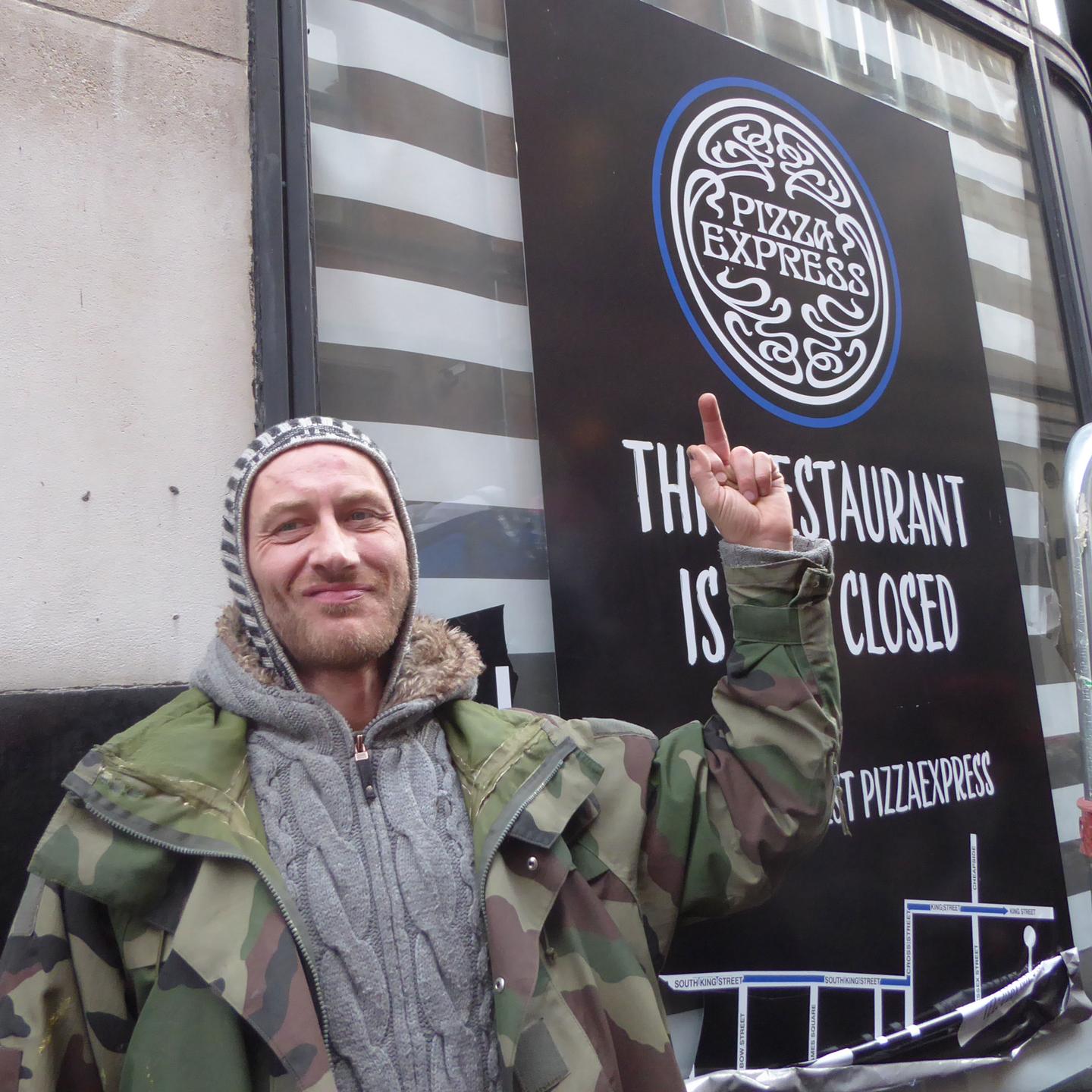 
Dec 21 2016, 11:56am
We hung out with the Manchester Activist Network, which is putting people up and helping them get off Spice.
A long-abandoned Pizza Express was the latest empty property taken over by squatters known as the Manchester Activist Network (MAN). The group had opened the building up to provide shelter and support for Manchester's massive population of rough sleepers, but at 7AM on the 16th of December, 30 bailiffs sawed through steel bars and into the building, "throwing a pregnant woman down the stairs" and confiscating half the squatters' possessions. With vans of specialist police in reserve, the operation will have cost both Manchester taxpayers thousands of pounds.

A Tameside Council spokesperson told VICE: "All agencies and the court agreed the premises were not suitable accommodation, and in particular were concerned following the recent deaths [of rough sleepers] in empty buildings [around Manchester]. The GM Fire Service made over four attempts to gain access to check the safety but were refused entry." They also denied the bailiffs, who wore cameras, used excessive force.

I had expected to arrive to chaos and detritus strewn across the street, but the crowd of homeless squatters and activists I met was calm, organised and ready to move on. Which shouldn't have been a surprise: after all, it was the ninth time MAN had been evicted this year.

Baby-faced Michael, 20, said he'd been homeless since a landlord kicked him out and stole his passport and possessions. "I smile all the time," he said – and it's true: he does – "but it kills me on the inside."

"I've worked since I was 14," he continued. "I even used to have my own milk float. I've paid council taxes. They've got it on record, but they don't want to help. We're not here to cause trouble, and we don't take drugs. We put people into buildings that aren't in use, we cook meals, we have a chat and see how everyone's getting on."

Ross, 28, is a former rough sleeper who was hooked on Spice, a recently outlawed drug that started its life as "synthetic cannabis", but has since gone on to wreak havoc among the UK's prisoners and homeless population. "The council say they're here to help, but they don't; they really don't," said Ross, an Anonymous mask hung around his neck. "They say there's nothing they can do for me. Before this I was in a shelter, but it wasn't helping – everyone there was on drugs. Since moving in here I've been clean for nine months. It's not easy, but these guys help me. It's like a family – I've never seen anything like it." 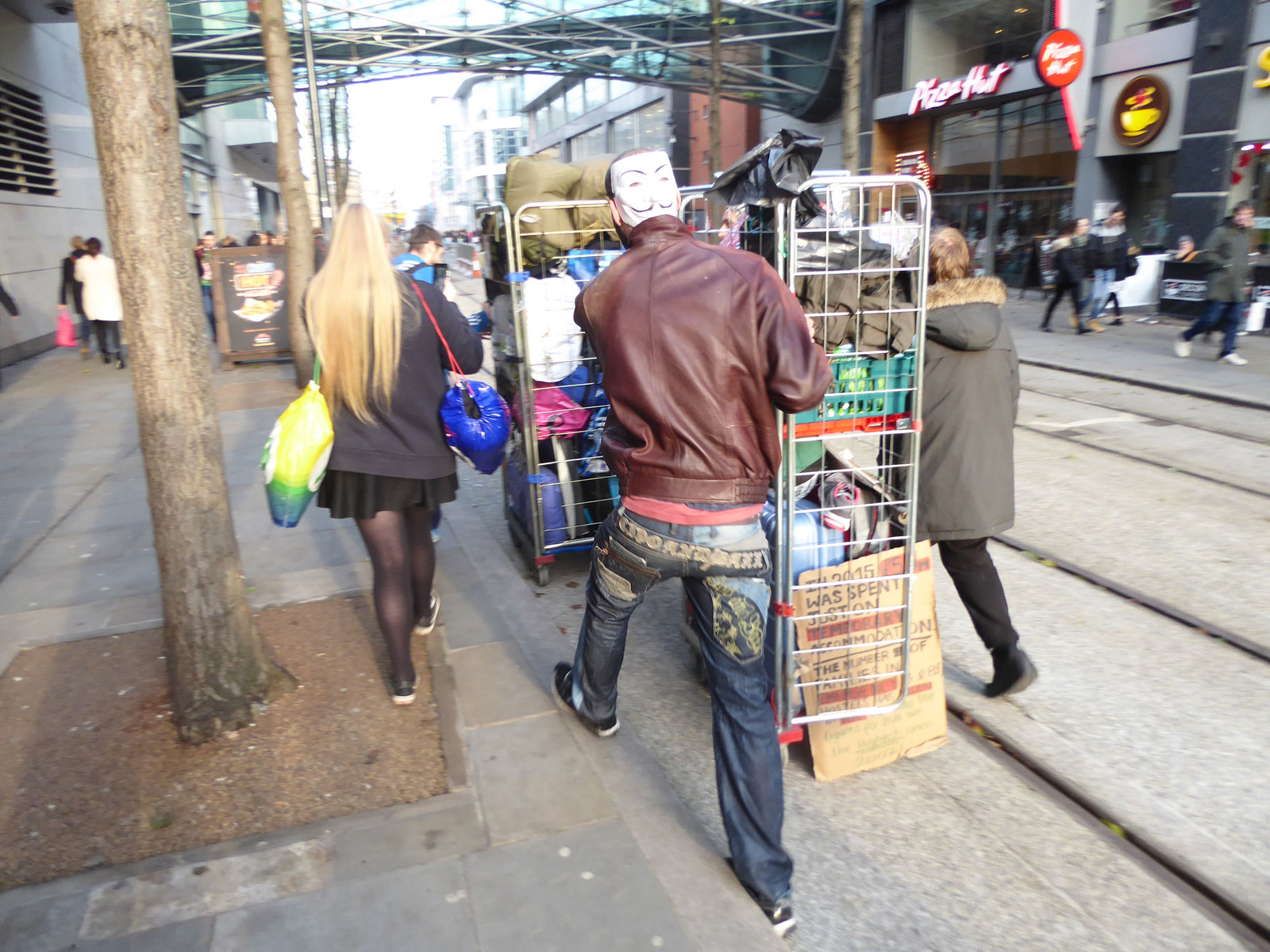 The squatters walking through Manchester

The call came through on a walkie-talkie that a new building had been secured, so the squatters' few possessions were packed up into metal milk-carts and they trotted off in convoy through a bustling Christmas market. As they arrived at their new home they emptied out tools onto the floor to see what had been salvaged from the bailiffs. "Manchester Activist Network lives on!" shouted an activist known as Logic. "We will not go down without our crowbar."

Two of MAN's masterminds are a pair known as Big Danny and Little Danny, who explained how the project grew out of the homeless protest camps which made headlines last year. "A long time ago, our communities handed over our responsibility to vulnerable and side-lined people to other bodies – bodies that have failed time and time again," said Big Danny, 26. "Here, people that have been forced to live isolated lives suddenly find an environment where everyone's voice is listened to and respected."

As such, the MAN community follows anarchist principles of democracy and personal empowerment. The debate over room allocation in the new squat, for example, was an embarrassment of good manners.

"These are people who've been told that they're not worth anything," said Little Danny, 28. "We're trying to get that feeling of powerlessness out of them." 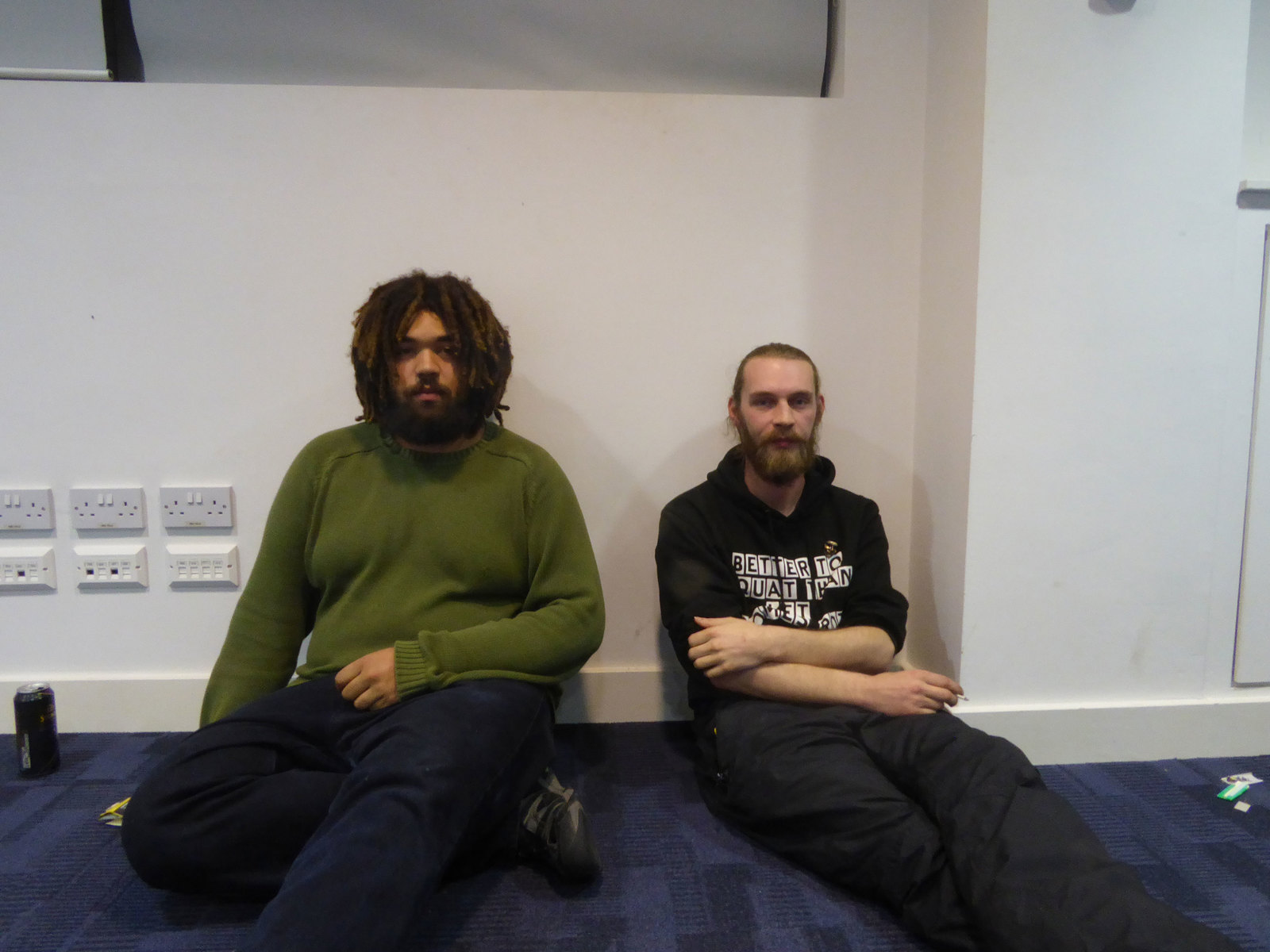 Rattled by the eviction, the crew took the afternoon to explore their new home, try out the showers and share food and drink. When "Fuck the Police" came on over a Bluetooth speaker, the squatters added "…and the council, and the bailiffs". Logic recited a poem along similar lines: "Fuck the state, it's not your mate..." This was move-in day, but usually the MAN squat is alive with activity, from banner-making workshops to an event on the 23rd of December where homeless squatters will be selling their paintings.

David, a trained mental health nurse who lives on the streets, has made visits to check in on those squatters who are prescribed anti-psychotic medication. When a vulnerable 20-year-old named Ray flipped out in the new squat, the Dannies calmed him down and took him to his new room, where he lit incense and gave me a Dorito.

Some residents are failed asylum seekers who cannot find work without being deported; others arrived legally from Poland to work and then had these rights retracted. Some are former prisoners; one squatter, arrested during the Pizza Express raid because he failed to attend probation meetings after being imprisoned for a political protest in a previously occupied building, will be spending Christmas behind bars.

Many used to be permanent fixtures begging in the city centre. "In hostels you get one hour of support services a week," said Wesley, 32, another former legal high addict. "Here, it's warm, it's safe and you get wrap-around support, 24/7." 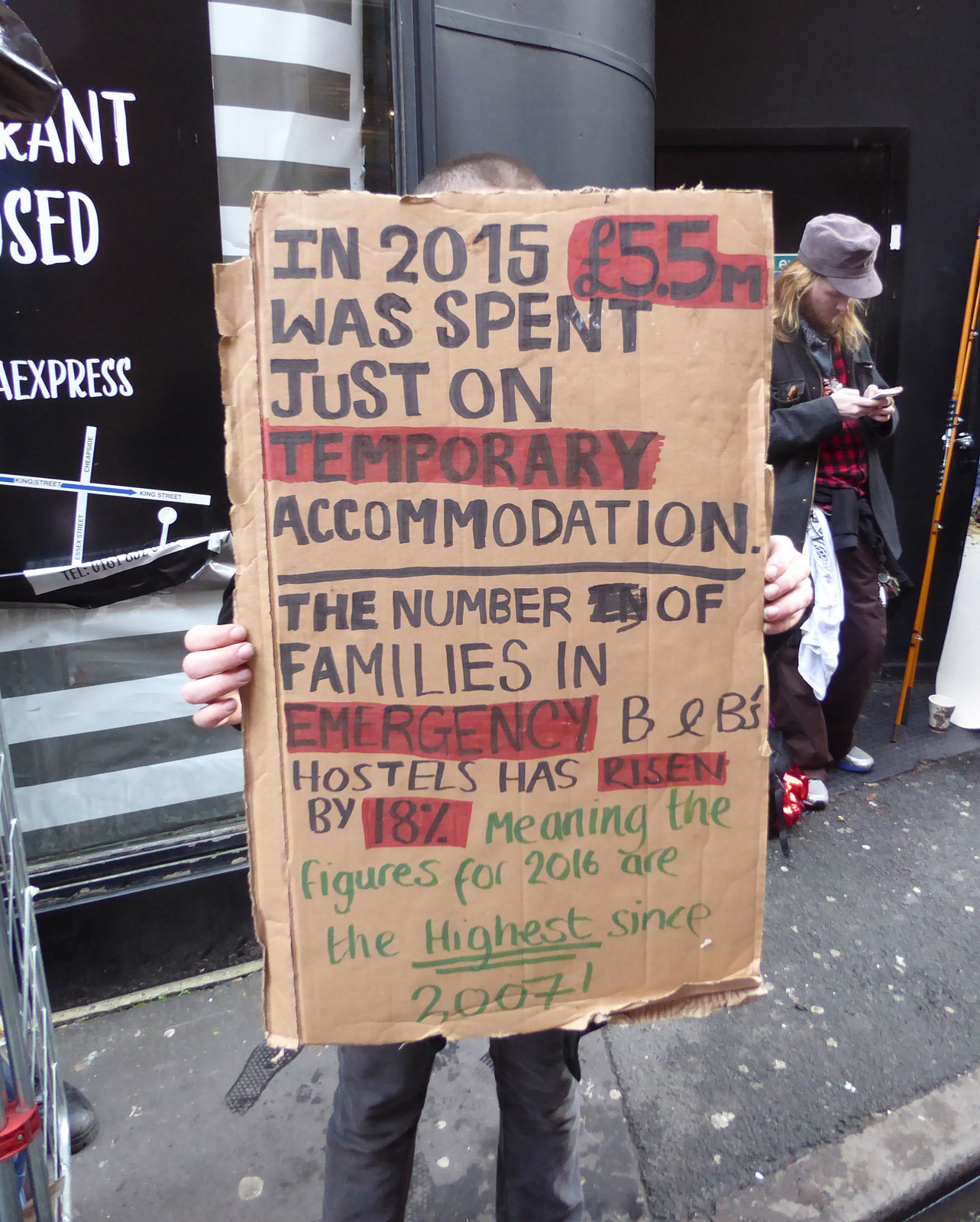 Among such abundantly positive vibes it's easy to forget that the squat is a temporary solution to a permanent housing crisis. There is a chronic lack of affordable housing in Manchester, where capital is sucked into what Little Danny calls the "sparkly, shiny, security-guarded" city centre at the expense of the city's most vulnerable people. Cuts to government funding – including Manchester's Homelessness Prevention Budget – have further driven homelessness.

There are more rough sleepers in Manchester than anywhere outside London, and their numbers have doubled in a year. Over 5,000 people identified themselves as homeless in the city across 2015/2016. They have been beaten, urinated on and burned to death. In November, the bodies of two more rough sleepers were found inside a burnt-out building the Manchester's Chinatown.

Paul Andrews from Manchester City Council has said: "Tackling homelessness is a major priority for the council […] But we are very clear that helping homeless people is not just about putting a roof over their heads; it's also about giving them the support they need to address the issues which have contributed to them being on the street in the first place."

Still, you can see where frustrations come from. "The cash is there," said Little Danny. "The council spent £10 million on Piccadilly Gardens – on a concrete square and some plant-pots – but it gave up on these people and left them to rot, when all it took to help them was a bit of willpower and empty space."

"The council don't want us on the street, they don't want us in empty buildings," said Ross, slapping the advert-plastered hoardings around the abandoned Pizza Express. "Where do they want us to go?"

I closed my account
thanks for sharing dude i love reading articles from europe where long term squats still to this day seem more viable then they are here in the states.

plus europeans throw molotivs at cops. so thats positive too. 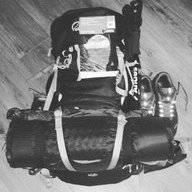 This is my home town

it's nice to see we're getting some recognition.
You must log in or register to reply here.