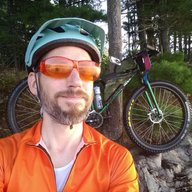 Would imagine many are familiar with the UL Shoestring Guide on r/Ultralight, and I wanted to share my experience with the Hammock Gear Economy Burrow 20. It's the old style with snap buttons to close the footbox and is standard length, width, and fill. Went with standard width and fill to keep costs down, and thought the flexibility of an open footbox might be worth it. I was wrong on all counts.

I bought it in October 2017 when in-between reliable housing and have used it most nights since then, except during the summer months. It's well made, good stitching, good materials. Managed to put no holes in it and it loses very little down. I have encountered the down shifting though, the top two baffles are really thin at this point.

I'm a skinny guy and the standard width isn't too much of a problem for me. I don't shift around much in my sleep, so once I get tucked it's usually ok. Unsurprisingly I notice when it's not quite wide enough when pushing the rated temperature. Also the 20 degree rating is not accurate with standard fill, at least in my experience, ymmv. My problems with the footbox have been taken care of in the new version.

Basically, I still use it because it's what I have but I'm very aware of it's shortcomings. After two years of use, can't deny it's well made, but the current price for a wide overstuffed Econ Burrow 20 is $216. At that point, saving an extra $80 for a Katabic Flex or other better quilt is probably the way to go.

The Flex is probably going to be a near-future purchase. Going to keep the Burrow around so I can layer up and be comfortable on 0 degree or lower nights, or use it as an underquilt if I try out a hammock.

Edited to add photos, it's shown on a Thermarest ZLite that I've been using since 2015, and a standard length NeoAir XLite I got a couple weeks ago on sale. Also the Thermarest compressible foam pillow has been used damn near every night for the past four years. It's my one true pillow.
Last edited: Dec 23, 2019

Do you have any photos of this gear? If you're willing to add some I'd probably put this on our featured posts page.

Hah, I was being lazy @Matt Derrick, photos added.
L

I just picked up a similar quilt off UGQ, its called the bandit, similar pricing, great piece of gear for hammocks and ground camping.
You must log in or register to reply here.